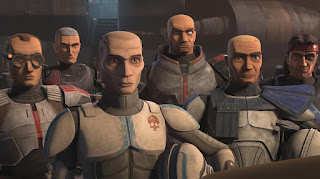 -- Trust placed in another is trust earned.

First of all, "Unfinished Business" is an excellent title for... well, all of season seven, actually, and this episode originally was the final episode released when the episodes themselves were unfinished, so it's especially apt.
Not to mention Admiral Trench who has been his own piece of unfinished business for a long time.
heh
Looking down at what I wrote last time I watched this episode, I see that I used that thought before.

I also touched, last time, on the quote I've closed this post with, which is just part of the "speech" Windu gives to the battle droids. It's interesting, though, because after he explains how many of them he's destroyed, he goes on to give them the choice to surrender. They do have free will, after all. The response? "Blast them!"

However, the episode is really about Echo and whether he can still be trusted after being held by the Techno Union for so long.

Oh, and there's a thing with Anakin that I think is very important. In short, he proclaims that he's not like other Jedi.
Which is true.

One of the greatest moments in the series happens in this episode. It's a bit understated, but it's pretty awesome. Let's just say it this way: Mace Windu gives a speech.
To battle droids.
In front of Obi-Wan.

This is a good solid arc. The Bad Batch is an interesting idea, though a bit like the X-Clones (if I didn't say that before). Their introduction was obviously not intended as the series-ending arc it turned out to be. There's a lot left to be explored here, not least of which is whether there are more clones like the Bad Batch.

And, then, there's Echo, because it's clear from "Unfinished Business" that his story line was just beginning. It makes me hope he shows up in Rebels. Yes, I know I could check, but I'd rather be surprised.

Anyway... It was not a bad arc to end the series on, though I rather wish they'd been able to craft a story that would have felt like a story that was bringing the series to a close. In most respects, with Ahsoka leaving the Jedi Order, season five has much more the feel of the series coming to an end. It certainly feels as if they were working up to... something, and I really wish Disney had allowed the series to continue. There's no real reason why Clone Wars and Rebels couldn't have run concurrently.


"My name is General Mace Windu of the Jedi Order. At this point of the Clone War, I have dismantled and destroyed over 100,000 of you type-one battle droids."
Posted by Andrew Leon at 12:00 AM