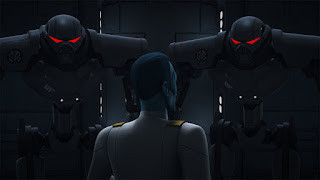 -- "I haven't been summoned by a ranking officer since that incident with the princess from Alderaan."

We're closing in on the end of season three, and things are beginning to get serious. Which is not to say that things haven't been serious, but there's a real lack of the overall humorous tone developing.

Thrawn has decided he has a mole and even knows that mole's call sign: Fulcrum. Have I mentioned who Fulcrum is? I can't remember, so I'm not going to give it away just in case I haven't mentioned it before. Not that it actually matters, I'm sure, but that's the way I am about it.

Ezra heads up a mission to get Fulcrum out before s/he's discovered while Thrawn brings in Colonel Yelaren to help ferret out the mole. Hmm... Do ferrets eat moles? I actually have no idea what ferrets eat, now that I think about it. As it turns out, Yularen was one of Kallus' teachers at the Academy.

Mostly, this was a very interesting episode. Tense. I have just one quibble, which I could probably solve by doing some research but, instead, I'm going to let it nibble at me because I don't care to go to the trouble to look it up. In the episode, Thrawn, unarmed, takes on a couple of assassin droids all by his lonesome. Thinking back to Zahn's books, the ones that introduced Thrawn as a character, I can't think of any precedence for him being any kind of physical personality. He's a cerebral character; at least, that's how I remember him, so I'm a little annoyed by them making him some great hand-to-hand combatant, too. Seriously, Thrawn doesn't need to have all the skills.

Or, maybe, he has always been that way and I'm just not remembering it. I suppose it doesn't matter, since those old novels have been kicked out of the canon. But Rebels is canon, so it is as it is.

Anyway... Interesting episode. Can't wait to see where it leads.
Posted by Andrew Leon at 12:00 AM