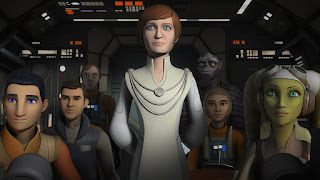 -- "I've begun to see this fight cannot be won in the Senate."

One of the things I've enjoyed most about Rebels (and Clone Wars to some extent, though this has been much more prevalent in Rebels) is the introduction of characters that we have known from the movies and getting to see where they came from and how they ended up who they are, especially with the more background characters. It gives an interesting perspective on how things turn out and gives us the opportunity to get to know some characters that we never had a chance to get to know before they died. They've brought in quite a few characters from red and gold squadrons that die in the assault on the Death Star. Gold Leader is in this episode, for instance.

But what we're really getting to see is Mon Mothma coming into the rebellion and pulling all of the disassociated rebel cells together into what will become the Rebel Alliance. I'm going to admit here that I have never been a huge fan of Mothma. In Return of the Jedi, she's overly stoic and devoid of charisma, enough so that it made me wonder (even when I was 13) how it was that she got to be in charge. I always felt that Leia would have been a much better choice. This episode, though, gives us some insight into how Mothma got to be in charge, and it makes much more sense with this as background.

Plus there's a lot of fun as the Empire pursues Mothma in the hopes of capturing her alive.
Most importantly, there's what may be the best animation sequence in one of these shows that I've seen. I don't want to give anything away, but it has to do with igniting nebula gas as a weapon. Really, so cool.

And, as I said last review, things are getting serious. It's time for you to start watching.
Posted by Andrew Leon at 12:00 AM