Mendocino and the Didjeridoo: Part Two 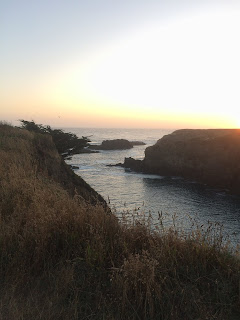 Fortunately, Mendocino (the town, just to be clear) has a decent coffee shop. It may be the only real redeeming quality about the place. Other than a few scattered houses, the rest of Mendocino is made up of B&Bs and little touristy shops full of junk. We seriously didn't go into even on shop while we were there unless you count the cafe. Okay, we did go to the chocolate shop but only to get some treats to bring back for our kids. After trying the one thing they had out as a sample, I decided we didn't need any chocolate from there.

But back to the coffee...

The coffee at the Didjeridoo was piss poor. It brings to mind the idea of watering down alcohol to decrease your costs and make your customers buy more at the same time. It was weak-ass shit, like trying to wipe your butt with wet toilet paper. Vaguely brown water. And, amazingly, it was even worse the second morning! That was like drinking warm, watered-down cream. There was no other actual discernible flavor. As my wife said, providing adequate coffee should be the least you are able to do. It's really not difficult and, if you can't manage that, it says a lot about your establishment.
Not in a good way.

So we were very glad to be able to walk over and get real coffee after breakfast before heading out to do our fun things for the day. Hanging around in Mendocino wasn't a part of the "fun things" for any of the days.

You know what? Mendocino is a fucking loud little town. It's less than 1000 people, not counting tourists (and who knows how many of those there are at any given time), and they seem to not ever sleep; at least, judging by how many times I got woken up each night, they don't. And I don't mean just noises from inside the B&B -- though there were plenty of those, too -- I mean noises from out in the town: loud traffic (though it's far enough away from the highway that you can't hear the highway traffic) in the middle of the night, distant crashes and clangs, people being outside at 4:00am making lots of noise. It was the kind of stuff you'd expect to hear in a city, not in what is supposed to be an idyllic seaside village. I'm on vacation; let me get some fucking sleep! If I want to be woken up at 4:00am, I can stay home with the fucking cat.

All of which was made worse by the owner of the Dreamtime (sorry, I'm not going to type out that stupid misspelling anymore) being incredibly noisy every morning when he came in to start doing whatever it is that he does at the buttcrack of dawn, like dragging trashcans around outside. I'm sorry but, if you have people staying in your house, be courteous and don't crash around waking them up before the sun is even up. If I want to be awake at 5:30 in the morning, I can do that home. I'm away from home so that I don't have to get up that early. Probably all the noise he was making was associated with the shitty coffee.

Also, turn off the fucking porch light at night. If not that, give us some curtains for the room so that we can shut out the light.

See, our room was at the front of the house with a big window looking out into the yard. With no curtains. This was problematic in so many ways. For one thing, the bed was against the window and set up so that the head of the bed was at the window. The porch light was just between the front door and our window, so the light shone in right in my face. Did I mention the lack of curtains? Oh, yeah, I did!

Of course, the real problem with the lack of any curtains is that it makes the room feel very... exposed. Especially with the bed against the window. We did have a big butterfly bush growing up under the window which blocked some of the view into the room. In the evening, between that and the reflection of the fucking porch light off the glass, you couldn't see into the room from the street or the yard or anything. I know; I checked. However, anyone on the porch or at the door, if they glanced over to the right, had a clear view of the our bed and anything happening in it.
What did I say about providing some fucking curtains?

Our room also came with a jetted, two-person tub. Except the jets didn't work. When I was on the phone making the reservation, the woman told me the jets didn't work and made it sound like a recent problem that they just hadn't been able to fix yet. As she said, they hadn't been able to get anyone out to the town to fix them because Mendocino is so out of the way. I shrugged that off at the time because we don't care about jets anyway. Later, though, we discovered that none of the jets in any of the tubs in the whole place work and that it's been that way for years. And years. I think reviews going back more than a decade mentioned the broken jets in the tubs.

Here's the thing, Fort Bragg is, like, 10 times bigger than Mendocino, and it's only about 15 minutes away. I feel fairly certain that there's someone in Fort Bragg who both has the skills and the desire to do the work. If not Fort Bragg, certainly Ukiah, which, also, isn't that far away. The real issue here is that the owner doesn't want to put any effort into the upkeep of the place.

For instance:
The tub is in a separate room than the bathroom. The bathroom has the toilet, the shower, and the sink. You come out of that room into the main room and around to the room with the tub. To cover all three of the places where you would normally keep a bar of soap, we got one tiny disc of soap that was about the size of a silver dollar. "Annoying" does not properly convey the emotion for this situation. I'm going to go out on a limb here and guess that the owner does not have just one bar of soap in his house that he has to move to wherever he needs it at any given time.

Also, not that we used it, there was a TV in the room. The TV was on a stand against the wall facing the open space between the end of the bed and the far wall. There was no way, really, to arrange the TV (an old tube model, not a flat screen) so that you could see it from the bed; even if you could have, it was a small screen, so you would have needed to be able to put the bulky TV right in the bed with you. There were no chairs in the room...
Do you see the problem here? If one had wanted to watch the TV, one would have been obliged to either sit on the floor to watch it or to watch it standing up. Probably people don't much use the TVs there, but, come one, I'm not five; I don't want to lay down on the floor to watch television anymore.

I mentioned this was a bed&breakfast, right? I'm being facetious; I know I did. There was no dining area...
I'm going to let that sink in for you until next time...
Posted by Andrew Leon at 12:00 AM