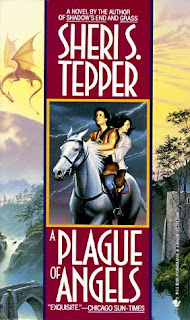 I'm going to lead with the fact that I haven't quite finished this book; however, I'm within 20 pages of the end, and I'm fairly certain that nothing can redeem it at this point, so I feel pretty safe in all that follows.

But let me remind you that I like Tepper and think of The Gate to Women's Country as a must read. Or, at least, a should read.

And I love A Plague of Angels as a title. However, it seems to have no connection to the book other than as a title, which is more than a little disappointing.

As is common with Tepper, this is a post-apocalyptic style novel. It's not quite post-apocalyptic because there doesn't seem to have been what we would think of as an apocalypse-level event, but the effect is the same. Man, after having used the Earth harshly, takes off for the stars in hopes of finding a better place to live than what they're leaving behind. Of course, not everyone goes, and this is a story about those left behind and putting together the pieces of the world into something livable. Except this story takes place so far after the exodus that it's a legendary event to most people. A story passed down and passed down and passed down.

So far so good, right?
That's what I thought, too.

The first bit of oddness is the Archetypal Villages that are scattered around the land and populated by Archetypal Characters. These people have no names, only titles: Orphan, Oracle, Hero. There can be only one character of any given type in a village. Now, these villages seem to have some relevance or importance early on in the book, and maybe they did when Tepper started the writing, but the whole thing about them gets shrugged off later on when one of the apparent masterminds of the world states that they are only places for misfits to live who have no other place in society. Not only that, but some of them are largely populated by androids.

So, you know, in a world where civilization and society have collapsed, some group of people decided to go around gathering up all of the orphans and creating a whole village for each of them, because it does seem that each village must have an orphan. But only one at any given time. And, when the village could't be supported by enough other misfits, this group of people supplied androids to fill the roles.

No, this whole premise is in no way supported by the text, especially the fact that this group of people supplies these android play-actors to these villages but seems to make no other use of them. For anything.

And then there's the part where mythological monsters spring back into being after the exodus. Why? No reason is given, though there's an implication that they were called forth so that the Heroes would have things to fight. Called forth from...? Yeah... No idea.

And talking animals show up, oh, somewhere a bit after halfway through the book.  Why? Because some guy started teaching them to talk.

But all of this is supposed to be coming out of the ruins of our own world so, well, I think if animals could learn to talk, it would have already happened since there are plenty of people who spend a lot of time trying to learn to speak with animals.

Oh, plus, there's a very convenient "battle of five armies" at the end of the book that's so contrived that the author has one of the characters state that it feels contrived but decides that it's okay because he was not the one that contrived it.

And I haven't even mentioned the "walkers," because, as it works out, they're too stupid to bother to mention.

This whole book, by the time I got to the end, felt like some kind of sweep-the-kitchen pizza. But, you know, not in a pizza kind of way. Unless that pizza was literally made from the sweepings of the actual kitchen floor, including dog and cat hair, stray coffee beans that bounced into corners, and bits of dry cat food that cat sticks into odd places probably to see if the dog will find them.
Not something you'd ever actually want to eat, is my point.

And this is the first book of a trilogy!
One that I will not finish, because I'm not going onto anything built off of this story.
In fact, this one is so bad that it's put me off of Tepper for a while.
To say that it was a disappointment isn't saying enough.
Posted by Andrew Leon at 12:00 AM