Mendocino and the Didjeridoo: Part One 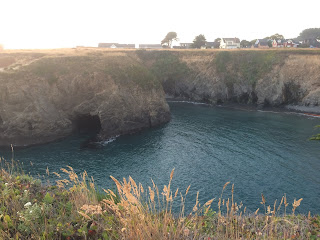 First things, first: I know that "didjeridoo" is misspelled. It's not my misspelling, but I'll get to that in a moment.

My marriage to my wife just became legal. No, no, no... It's been legal, but, now, it's legal drinking age! So, you know, my marriage can legally go out, now, and get shitfaced.
Wait! This is coming out all wrong. This joke was so much better in my head. Which is what my wife said after I made it the third or fourth time.
Look! It's funny to me, okay!

For our anniversary, we decided to go spend a couple of days in Mendocino (the town, not the county, though the county, too, since Mendocino is in Mendocino county (go figure, right?)). The process for this decision is rather longer than can be explained easily since it's actually the culmination of years, but it boils down to the fact that I had only ever been to Mendocino (town) once, because we stopped there for coffee on the way to Fort Bragg some years ago. Mendocino is an ultra-popular tourist spot, and my wife figured I should experience it at least once so that I could understand...

However! It is on the coast, and the coast out here is beautiful, so there would be that, at least.

My wife had a specific set of desires from the place where we stayed but, without going into that story, I messed all of that up by being distracted by the cost on the places we were looking at despite the fact that she told me not to worry about the money this time. 21 years of marriage doesn't happen every day, after all! We ended up staying at the Didjeridoo Dreamtime Inn which, really, had none of the things she wanted beyond the fact that it was a place to stay.

The short of that is that the Didjeridoo is a bed & breakfast, and I have developed a thing for B&Bs over the last several years, and the reviews for the breakfasts at Didjeridoo were pretty good despite an overall average rating, at best. To be fair, none of the places we were looking at got better than an average rating unless they actually crossed the don't-worry-about-the-cost line to where we had to actually worry about the cost. [I'm sorry; there's no place in Mendocino (the town) worth $400/night. Or, really, even $200/night. (I'm not really sorry.)]

So let's break all of this down...

First, there's the issue of the name: Didjeridoo Dreamtime Inn. Why is it misspelled? I don't know. And I don't know if the name came with the inn when the current owner came into possession of it or if he named it that. I know two things:
1. The inn has a funky room numbering system that the owner says was in existence when he got the Dreamtime. He left the room numbers on the doors even though they make absolutely no sense.
2. So, maybe, the inn was already named "Didjeridoo" when he got it? But, dude, correct the spelling. Seriously. And, if it was his misspelling: Correct the spelling. It's not quaint; it's stupid.

And, yet, it was my suggestion as a place to stay. I don't know what I was thinking, because the misspelling should have been a hard no for me, but, for some reason, I let it slide.

Second, there's the issue of parking. In looking at various places to stay, one of the amenities many of the places mentioned, including the Didjeridoo (though I can't remember where I saw that, now), is that they include free parking. Or just parking. Or some such. I found that a bit weird because what place wouldn't have parking, right? Sure, there's no street parking in my neighborhood but, then, my neighborhood isn't a tourist attraction, either. If it was and we were making money from people coming to our neighborhood, we'd figure out some way to accommodate the parking issue. That's just good business.

At any rate, we got up to Mendocino on Wednesday night, but relatively early Wednesday night, and found parking on the street in front of the Dreamtime and I didn't think much of it. I did wonder in passing where this available parking for the B&B was supposed to be because I didn't see anything that looked like parking for it, but we'd parked so I shrugged it off.

The next night, though (that would be Thursday for those of you paying attention), we had been abroad during the day and, when we got back, there was no parking near the inn. In fact, we had to park three blocks away and walk back. And here's the thing: There's no parking anywhere in Mendocino. Nor are there sidewalks. Which means there are no curbs. Which means parking "on the street" is actually only parking partially on the street and the rest in a ditch by the side of the road. It also means that you walk in the street when you walk through town... because the side of the road is taken up with cars parked in ditches. And there are no sidewalks.

That places were calling attention to the fact that they offered parking suddenly made sense. Except that none of the places in the town actually had any parking to offer. The only places that had put in parking lots were the larger hotel like places that weren't actually in the town itself.

Maybe some people consider this whole lack of sidewalks and curbs and parking "quaint" and "rustic," but I find it to be inhospitable. I really don't think it would ruin Mendocino's image for them to spend a little of their tourist money on providing sidewalks for people to walk on so they don't have to walk in the street when coming back from the coast after sunset.
But maybe I'm crazy.
Posted by Andrew Leon at 12:00 AM