Mendocino and the Didjeridoo: Part Three 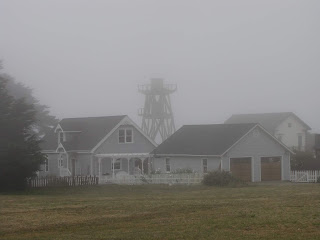 By the way, Mendocino is full of water towers. It's even kind of known for it. The Dreamtime even has a room in their old water tower, but so do many of the B&Bs. I kind of want to stay in a water tower, now, just not the one at the Dreamtime.

Where I never want to eat again.
Or sleep.
Or not sleep, as the case may be.
But we were going to talk about the "breakfast."

Every B&B I've stayed in prior to this one -- and there have been more than a few -- have been very accommodating about breakfast. Either they have taken a time request and had your food available at the time requested or they've had a large window of time in which you could come serve yourself buffet-style or... well, some variation on those themes so that you could get up when you wanted to get up and have some kind of choice in the meal or whatever. The Dreamtime was no dream when it came to breakfast: Breakfast will be served at 9:00am. If you want it, be there.

Okay, so we got up for what we thought would be coffee at 8:30 so that we could sit around and relax for a bit with our "coffee" before breakfast. So, you know, there was the whole coffee thing...
Then, there was no dining area. There's a room with a dining table, on which all of the food for breakfast is set, but the table has no chairs, not that there would be room on it for people's plates as it's a fairly small table. Rather there are some sofas and other chairs scattered around the room and TV trays on stands for people to eat at. TV trays. There are a couple of patio tables with chairs out on the deck if you don't mind sitting in dew and fog moisture, which we did the second morning. We sat outside the second morning because the eating accommodations inside were so... lacking. And just a gentle brush against one of the TV trays could cause a disaster, as we discovered with a cup of what-should-have-been-coffee on that first morning.

Now, let me give you a mental picture of the breakfast...
There were blueberry pancakes: They were made with tiny from-frozen blueberries and were mixed into the batter so that the pancakes were purple and the blueberries themselves almost non-existent. I get this mistake; it's how most people make blueberry pancakes. It's how I made them the first time I made blueberry pancakes. So these were perfectly adequate. They didn't taste bad or anything; they just weren't great.

There were fried potatoes: These were from small potatoes (probably "new potatoes," if you know what those are) cut in half. They were only lightly seasoned so a bit bland and probably slightly over-cooked. Not so much that they fell apart, but some of them were blackened on the outside. They were perfectly fine, completely edible, just not great.

There were scrambled eggs: As I wrote just a few weeks ago, eggs are difficult. Good eggs are difficult. Adequate eggs are fairly easy, and these were perfectly adequate. They were a bit overcooked but only in that they were too firm; they weren't burned or anything, and they tasted fine enough, like eggs. They were the kind of eggs that you're likely to encounter in any old diner.

There was also a bowl of yogurt and a bowl of those same from-frozen blueberries used in the pancakes which weren't quite thawed and somewhat runny, and probably some other stuff though I'm not remembering what at the moment.

What I'm saying here is that the breakfast was fine. There just wasn't really enough of it for the number of people present. But here's the real issue:
The cook, after placing the food out on the serving table, gave a run down of what he had provided. He seemed like a really nice guy and, like I said, the food was perfectly adequate. People started getting their food while the cook stood in the doorway chatting to people as they served themselves. While this was going on, the owner of the place came out and... well, while the cook was standing there, he apologized for the food. Evidently, the owner usually does the cooking but is "training" a new cook (the man who made our breakfast that morning), so the owner felt that he needed to apologize for the breakfast not being up the usual standards. He did this right in front of the cook, which I found to be incredibly rude. Incredibly. It was fucking rude and it really offended my sensibilities. I really can't put into words how abhorrent I found his behavior.

I made sure to personally thank the cook after breakfast for the very fine meal he had provided.

But here's the real kicker: The next morning, the owner did cook the breakfast, and it wasn't as good. It was the same breakfast, too! Other than some French toast strips (which may have been from a box; I couldn't tell) being subbed in for the pancakes, everything was the same, just more bland than the day before. Much more bland. Which really makes me wonder if the cook-in-training wasn't actually a much better cook than he appeared and just hampered by having to cook to the owner's specifications.

And, you know, maybe I would have let all of the breakfast issues slide if not for the thing with apologizing for the food of the other cook. I get that I have high food standards for food and have difficulty finding places to eat that I think are worthwhile, but I tend to take all of that into account and realize that I'm actually a damn fine cook and it's not exactly the fault of the other places, but, come on man, you don't stand there in front of someone and apologize for their work as if it's substandard. Especially if your own doesn't rise to the same level.

It might sound, with all of this, as if it was a bad trip, but it really wasn't. Granted, this is the first place we've stayed (both the B&B and town) where I didn't say, "I'd really like to come back here some day," but it wasn't a bad trip, just the least good of the trips we've taken and the places we've stayed. But we got in some great hiking, including up to see a cool waterfall in Russian Gulch; ate at one of our favorite restaurants, which is too far away to go to on a regular basis; and had a use of an un-jetted two-person soaking tub; not to mention sitting above glass beach and watching the sunset. It was a good time.
I just don't need to go back to Mendocino (the town) to stay again, and I certainly don't need to stay at the Dreamtime Inn again.
Posted by Andrew Leon at 12:00 AM