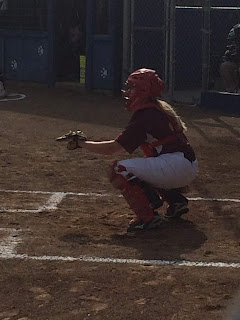 Obviously, the first thing you need to catch a softball is the actual softball. It's difficult to catch something that isn't there. That's why there's an absence of things like unicorns, dragons, and dinosaurs in the bedrooms of little boys and girls all across the world.

So here's a thing:
Last year at one of my daughter's softball games, the coach told their best hitter to not hit a home run because they only had three softballs left, and they couldn't afford to lose the ball. Well, she could hit a home run as long as it was one of those that went to the fence and she was able to do it because of the outfielder chasing the ball. Just don't hit it over the fence.
But she did.

They made it through the game, but it's rough when you have to always be mindful of how many balls you have left in the bucket. It's like when you have to budget out how much gas you can afford to put in your tank rather than just filling it up.

To put it all another way, let's just say that girls' softball is not a priority for schools, especially on the non-affluent side of town (where we are), where there is no real support for sports for kids at all, at any age. That stuff is reserved for kids on the other side of town... Now I'm wondering if train tracks play a role in this at all, because we do have them; I just don't know if the tracks divide the city in the way that I'm speaking of.

Of course, then, the next you need is a glove.
But if you can't afford a bucket of balls, you can't very well afford gloves, can you?
And here's the thing:
At pretty much all of the other school in Santa Rosa, the girls playing softball on the high school teams grew up playing softball for the city league and have all of their own gear, like my daughter. But, see, my daughter is the only one of those girls on her team, because we drove her across town so that she could participate in softball when she was a kid. That's a luxury at least 50% of the girls on her team couldn't afford, either because of the significant monetary cost to join the league or because of the significant time cost of practice and games (not to mention the cost of hotels for away games or spending hours and hours driving back and forth because you couldn't afford to stay over night for the tournaments (which is what we did)). All of which means that many of the girls on my daughter's high school team do not have softball gloves or headgear or bats; they depend on the school to supply those for them. Just like a lot of kids depend on the school to supply musical instruments for the music program.

Which brings us to the  part where I'm asking you for money. Well, not me, my daughter is. They're holding a fundraiser, and it would be great if you could donate. It doesn't even have to be a lot. Are you drinking some Starbucks sugarbomb coffee right now...?
Are you?
I see you there moving it away from your monitor and/or your phone so that I can't see it, but it's too late! Those things are no good for you, anyway, you know? And that guy who used to be their CEO is a dick, so put that money to better use. At least once. That's all it would take, the cost of one of those overpriced cups of coffee would go a long way to helping these girls out.

So please follow the link and give them what you can. $5.00 would be great! More would be even better! They have a breakdown of how the money is used and what it will provide. My daughter would love to meet her goal!
Posted by Andrew Leon at 12:00 AM