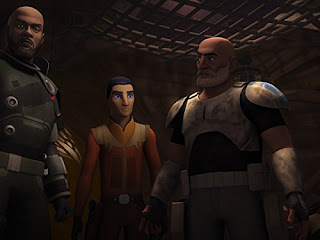 -- "There are times I hate being right, and I hope this isn't one of them."


I guess we're on a dead planet kick: Dathomir last episode, Geonosis this episode and next. Wow! The Clone Wars really left a lot of dead planets. Which makes me wonder about the "current" state of Mandalore. The original conception of Boba Fett was that he was the last of the Mandalorians, but so much of that got changed in the prequels and the subsequent Clone Wars episodes dealing with Mandalore that I'm sure what the current status actually is. I'm not even sure the Fetts were supposed to be Mandalorian at this point.

None of which has to do with this episode at all.

So getting back to Geonosis, a great place for a vacation home!
If, you know, you like absolute solitude. That is until the zombie bugs come for you.
None of which are in this episode.

But Saw Gerrera is in this episode! And he's looking more like how he looked in Rogue One than he did last time we saw him. Saw's an interesting character, one who could probably support his own series. [Hear that Disney? Give us a Saw Gerrera series!] He's gone missing on Geonosis investigating the disappearance of the entire population of the planet. And what do you do when your team investigating a disappearance also disappears? You send more people, of course!
And Jedi, if you have them.

Not that the rebels have actual Jedi, but they have the closest thing to it that's left in the galaxy.

I'm sure all of this is leading us toward the Death Star and Rogue One, but that's just a guess.

"Honestly, I was hoping I'd never have to come back to this dust bowl."
Posted by Andrew Leon at 12:00 AM