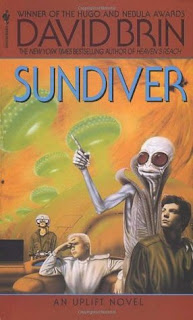 I had high hopes for this book. Okay, well, that's not exactly true; it's just that I haven't read a book I really loved in a while now, and I was just hoping to at least like this one. It's an award winning book, and my wife liked it and the other books in the series back when she read them, though that was a long time ago at this point. Needless to say, I was disappointed. In the book, not my wife.
I was disappointed a lot.
Not Snow Crash a lot, but a lot nevertheless.

But I think I get it, why sci-fi fans like this book and Snow Crash and other books like them: They're responding to the concepts, the ideas, rather than to the book itself and the actual writing. Don't get me wrong, I'm all for a good idea, but I think if you're going to make it into a book, you have to back it up with some writing that supports it, and this book didn't have that. Nor did Snow Crash.

So, yeah, yadda yadda, uplift, yadda yadda. The idea is that older alien races will find pre-sentient lifeforms and raise them to sentience and be their patrons. There's this whole galactic system for it. Yes, it's an interesting idea, but the book... Man, it was hard to read.

Mostly because the protagonist was his own deus ex machina. As it turns out, Jacob, the main character, had a split personality, and he somewhat inappropriately referred to his alter ego as Mr. Hyde. Basically, any time Jacob ran into a situation he couldn't handle he could whip out Hyde and Hyde could do it. Because Hyde could do everything. Need a lock picked? Hyde can do that. Need to pocket someone else's belongings without anyone else seeing? Hyde can do that. Need to shit flying monkeys out of your ass? Well, Hyde didn't do that, but it wouldn't have surprised me.
It's lazy writing, though, having a way for your protagonist to personally meet any and all challenges on his own with his own secret weapon. Actually, it reminds of a horrible 80s movie, The Dungeonmaster, in which the hero had a laser-firing, computer watch that would defeat all of the bad guys.

As a total aside, that is one of the strengths of the Harry Potter books: Harry can't do much of anything on his own. I mean, he needs help, a lot of it, and he gets it by having a support team around him. Secret Harry never pops out of his head with all of the correct spells to accomplish whatever he needs to do at any given time. It makes him believable as a character.

Having a split off personality hiding in your brain does not make for a believable character.

Not to mention the part where anytime the story would get stuck because the characters didn't have enough information to move forward (not to mention the audience), Hyde would pop up with an insight and move the plot forward. Not that it was an insight Hyde had any right to have, but, hey, when the author gets stuck with how to move the plot along... Yeah, just toss the new info in from, basically, nowhere.

As if that's not already asking a lot from the reader in terms of accepting things, we also have to believe that we've managed to make spaceships that can fly in the sun... using "refrigerator" lasers. And I'll buy that. I mean, I will if that's the thing the author is asking us to accept but, then, he has to throw in aliens that live floating around in the outer layer of the sun. And other stuff... All together, it was just too much to put up with at any given moment. Something was always coming across as dumb to me because there was just too much to buy into.

And, as if that wasn't enough, the author kept adding things in that really should have been a part of the fabric of the book. It was as if, as he was writing, he'd have a brilliant idea about something that should be in there and, from that point onward, that thing would be in the book, but he never wove those things back into the story that he'd already written. And maybe that's just me, as a writer, who is seeing that, but I know how that kind of thing goes and, if you're unwilling to go back and work those things into the bit you've already written, then leave them out of the book.
Seriously.

So... I suppose the real question, now, is whether I'm going to go on to the next book in the series. Honestly, I don't know. I have the books here and had planned to read the series because I had thought I was going to enjoy it and all of that. And it's one of those things where I have this question poking at me now about what people have seen in these books. Maybe the next one's better? Book two does, actually, have higher ratings than this one. For the moment, though, I'm going to read something else. Once I finish that book, I'll see how I feel about giving Startide Rising a chance. I'd say it's not looking good but, then, I did read all of that Lovecraft shit and L'Engle's mess, too.
Posted by Andrew Leon at 12:00 AM