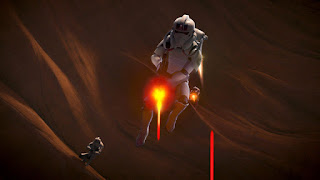 
Jumptroopers are cool! Or, as they are called in this episode, rocket troopers. But I looked it up and "rocket troopers" are the "also know as" term, so I'm going with jumptrooper.

Also, Saw Gerrera is an asshole. Which I knew, because you can see the asshole streak in him back when he was first introduced, but it's becoming more than a streak, something more along the lines of a big, gaping hole. It doesn't make it less interesting to see the evolution of the character from his first appearance in Clone Wars to his last in Rogue One.

This is one of those frustrating kind of episodes. The team caught a Geonosian last episode, and it keeps trying to tell them about the Death Star, but, well, there's a language barrier and the rebels have no actual way to comprehend what it's trying to say, so they continually misunderstand.

And then they have to fight the Empire.

Most of the episode, though, is dedicated to the question of whether the Geonosians deserve to be wiped out, not the kind of question Rebels usually goes in for, so it was good to have them dealing with a more serious kind of philosophical question. You know, the kind of thing Clone Wars did all the time.


"Stupid sand. It gets everywhere."