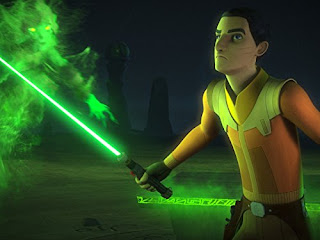 -- "Our futures converge on a planet with two suns."


This episode has so much in it, I hardly know where to begin, especially if you want it without spoilers. Oh, who am I kidding? None of you are going to watch this, so I'll just spoil away!


Ezra is being plagued by visions of Darth Maul... which turn out to be not so much visions as the real thing. Talk about a way to ruin your day! Maul is still stuck on that thing whole Ezra being his apprentice thing. PLUS he wants to know what it was the holocrons were going to reveal to him and Ezra. He REALLY wants to know.

Which leads them back to Dathomir, apparently where Maul has set up shop, in the ruins of the Nightsisters' temple. Or something. And the dead Nightsisters don't really seem that happy... about anything.

At any rate, they're not happy and are looking for a way to hook themselves back into the land of the living.

And the darksaber shows up.

And Obi-Wan... Well, that's all I'm going to say about that.