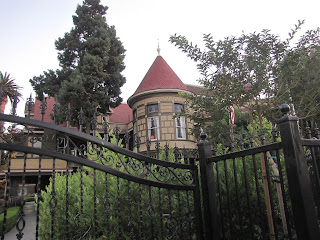 The Winchester Mystery House is located in San Jose, right in the middle of town, which was kind of weird for me, actually, because you don't think about a "haunted mansion" being right downtown surrounded by buildings and restaurants. Of course, there was no city surrounding the house when it was being built... when it was being built for 38 years.

Sarah and William had a daughter who died after only about a month. Sarah was devastated by the loss, and the couple never had more children.

Her father-in-law died in 1880 and her husband died in 1881, leaving her with about a 50% ownership in the company and insanely wealthy.

The death of her husband drove her out west, where she purchased the property on which she would begin building her mansion.

Once construction began on her mansion, it continued non-stop up until the moment of her death, 24 hours a day, seven days a week. (As far as I can tell, there were no exceptions to this.)

She had a fascination with the number 13.


Here are the legends:
She believed she was cursed because of all the gun deaths caused by her company.

She built her mansion in the haphazard style that she did to confuse the spirits of the dead which were constantly seeking her out.

She slept in a different bedroom every night so that the ghosts would never know where she was.


I think I had some other things I wanted to say about this, but I got interrupted, and I don't remember what other things there were. Anyway...
Taking pictures inside the house is not allowed, but, as I said in yesterday's post, we went on a candlelight tour, so there wasn't enough light for pictures anyway. Pictures will be posted tomorrow from the grounds.

Fun fact:
The house was originally seven stories tall, but it lost three stories in the 1906 San Francisco earthquake. It was never rebuilt to that height and remains at four stories, today.
Posted by Andrew Leon at 12:00 AM