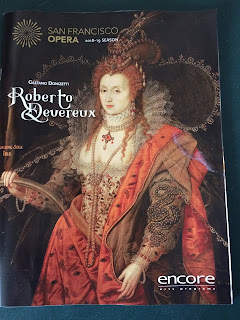 Donizetti is one of the most prolific composers of opera who has ever lived, having composed nearly 70 operas in his 50 or so years on Earth. I'm just going to assume, wait, I don't have to assume; he wrote his first opera at 19, so that's better than two a year for the rest of his life. Which I don't know why I'm telling you (or even if I told you before, considering that this is the third Donizetti opera I've now seen) other than to say that Donizetti wrote a LOT of operas, and I'm having to go with idea that they weren't always good. On the one hand, I loved Don Pasquale but, then... Well, then there's this.

I want to make it clear, here, that my problem is specifically with the opera itself, not the production. As is generally the case with SFO, the production was top notch. The set, while not as good as the previous opera we saw, was still pretty fantastic and based, loosely, on the Globe theater. It was meant as a metaphor, but I'm not sure that bit really worked. The costumes were great. And the performances...

Okay, Sondra Radvanovsky, who played Queen Elizabeth, was amazing. Seriously, she was incredible. Both her singing and her acting. I can't quite say the same for the rest of the cast. Not that any of them were bad, they just didn't rise to the same level as Radvanovsky.

And this is where bits of the opera begin to fall apart for me, though. It's a bel canto style opera, which means, approximately, "beautiful song." Donizetti was one of the central figures in bel canto. On the surface, that sounds fine, right, an opera with beautiful songs? The problem is that bel canto can better be described as happy sounding music. It's all light and bubbly and stuff and, well, Roberta Devereux is a tragedy. The words and the music don't fit together at all. It's a little disconcerting to have someone singing about betrayal and heartache while sounding as if she's singing about a glorious spring day.

Then there's the bit where Donizetti and his librettist, Salvadore Cammarano, took an actual historical event and completely fictionalized it... to get at the "emotional truth" of the story, they said. Um, wait... If you completely change the story so that it has no real relation to the things that actually happened, how can you get at any emotional truth involved in what really happened? The short answer: You can't! And they went for the wrong "emotional truth" with this story, anyway.

Which brings us to the biggest issue of Roberto Devereux:
Elizabeth governed England during a time of tremendous prosperity for the country. "She" defeated the Spanish Armada, making England ruler of the seas. And while I know it can be debated how much of this or how much of that can be attributed to Elizabeth, Donizetti reduces her to a petty, lovesick adolescent who has people executed for spite and personal vengeance. A female Trump (#fakepresident), if you will.

It was disappointing, to say the least. It played up all of the worst cliches about women while adding some horrible plot devices, including what can best be described as a "magic" ring that worked as a "get out of execution free" card. This is not an opera I'd ever want to see again, no matter the production. And it puts in doubt future Donizetti operas. Yeah, despite how much I loved Pasquale, this one was so bad that I'm not sure I want to see anything else by the guy. Especially since I wasn't crazy about Lucia di Lammermoor, either. Maybe another of his comedies.
Posted by Andrew Leon at 12:00 AM