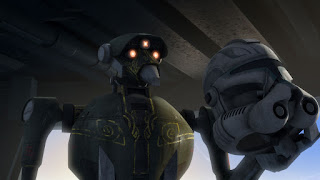 -- "I'm sure everything will go horribly wrong."

Remember that episode of Giligan's Island where the Japanese soldier who doesn't realize World War II is over shows up in a submarine? You know, the fact that he'd been lost for... what? 20 years explaining that he didn't know. Now I'm wondering what he ate that whole time, because it was a tiny submarine. Anyway, he turns up on the island and is still busy being at war. This episode is kind of like that.

Rex, Kanan, and Ezra hit up a planet where Rex believes there's a stockpile of weapons left over from the Clone War, and he's not wrong, but, as it turns out, they've been taken by a holdout of Separatist droids who think the war is still on. And so, too, our heroes, as they stumble into a trap.

The Clone Wars frequently delved into philosophical questions, whole episodes and entire arcs being devoted more to the question being asked than to the action, but Rebels has mostly stayed away from that and, even when dealing with any kind of moral dilemma, it has kept the action first and foremost. And this episode has plenty of action, but it may be the first episode where the questions really are the focus of what's going on. Questions like, "If no one won the Clone War, who benefited?"

It's a good episode. One of my favorites of the series so far. Probably, with its emphasis on Rex and the Clone War, you could even watch it without having seen the rest of the series, assuming, that is, that you've watched Clone Wars.

"We'll be fine. We have a Clone Wars veteran with us."