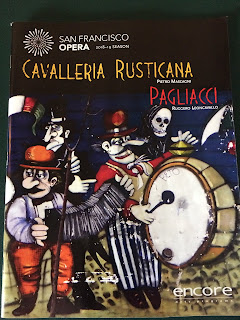 Here we are well into the 2018/19 opera season. "What?!?!" you say, "When did that happen?" Well, that happened last month when I was posting only photos. And writing various posts that weren't scheduled to go up until October. Like this one. Oh, come on. It's not like you were going to rush right out and see it anyway, so you didn't miss anything. You can just be happy in the knowledge that I got to go see it and wish you lived closer to San Francisco.

Our first opera(s) of the season was a pair of one act operas that are traditionally performed together. There's not really a good reason for this other than the fact that they are relatively short for operas, being one acts, and the fact that they were composed at roughly the same time and are early representations of the verismo movement. That's that thing that Puccini is known for. Cavalleria Rusticana is considered the first verismo opera.

It's kind of funny, actually: Mascagni wrote the opera for a contest... Yes! A contest! They had those back then, too! It's kind of weird because I always sort of thought that writing contests (of whatever kind)  were more of a modern invention, but I guess not. So, anyway, he wrote it for a contest, the first prize of which wass that the organization holding the contest would produce the winning opera. Well, Mascagni won. And you could say that it actually changed opera permanently.

But this isn't a history lesson; it's a review, so you'll have to look it up if you want to know how that turned out. Cruel, I know.

The first thing to know about this particular production is that the set was amazing! I mean seriously amazing. The two operas, the second being Pagliacci, are actually set in different places and aren't connected at all; however, for this production, they set both operas in the same small village and used the same village people for both operas as well as some of the characters. That, also, was really cool, but the main thing was that the set was amazing, and they were only able to do that by setting them both in the same place so that they didn't have to do a set change between the two performances.

The next thing to know, I suppose, is that the set (and I'm including the costuming as part of the set, just because) was the best part of the production. Which is not to say that this was not a good show, because it was. All things considered, it was pretty engrossing. As is pretty typical with verismo operas, they were both tragic love stories, not that that is not pretty typical in opera in general, but verismo kind of specializes in it.

Unfortunately, the performances didn't rise to the same level as the set. Mostly, they were solid, but there was nothing exceptional. Actually, the one guy who was supposed to be a big deal, Dimitri Platanias, fell flat. And he had parts in both operas. But he was definitely a "stand and sing" kind of guy and seemed to have problems moving around the stage when required to. He tended to be rather expressionless, too, so, when in Cavalleria Rusticana he finds out that his wife is having an affair, he comes off as kind of bored, likewise when he's challenged to a duel by his wife's lover a bit later.

It's amazing how one person's performance can affect an entire show.

And, you know, maybe he was just having a bad night. I don't know. All I know is that Platanias was supposed to be a big deal, but it's difficult for me to always know what that means. Maybe he's a big deal solely because of his voice, which is a valid thing in the opera world, but, I think, opera is changing and you have to bring some form of acting ability with you to the stage, and this guy, at least on this night, didn't have it.

Still, the production was well worth seeing.
Posted by Andrew Leon at 12:00 AM