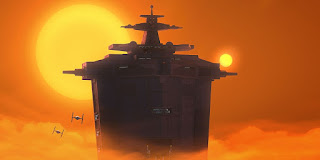 One of the things that has become kind of accepted lore about Star Wars is that the rebels have better pilots (and ships) than the Empire, just much fewer of them. What the Empire lacks in skill and shields, they make up for with numbers. Lots and lots of numbers.
The opening of this episode abuses that notion as a handful of TIE fighters lay waste to an entire rebel squadron of a-wings.
It was fairly spectacular.

So they sent Sabine in to get some.

And we get to meet Wedge while he's still an Imperial cadet!
Which is pretty fucking cool.

I can't honestly say at what point I became a Wedge fan. I know that it feels to me that it was before Empire came out. I mean, he did fly his x-wing right through a TIE fighter. So cool. Of course, he also abandoned Luke during the trench run, so... there's that. I do know that I was very excited that he was Red Leader in Jedi. I suppose it doesn't really matter when, just that I am. Cool character. Glad to see his origin story, per se.

"We have to make the most of this chance; we might not get another."