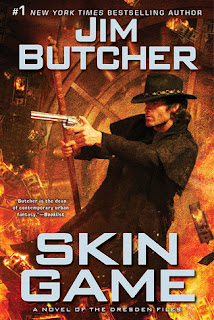 Am I all caught up now? I think I'm all caught up now.
Actually, I know I am, because I checked. I'm so caught up there's not even a release date for the next book. And, my goodness, there are a lot of these now!
Butcher seems to be playing quite the long game with the series at this point, each book moving the over-arching story a few inches closer to wherever it is he's going with all of this, which may be feet or may be miles away.

My biggest criticism about this book remains the issue of Dresden and his association with pop culture. I get that it's part of Butcher's schtick with Dresden, but it's gotten beyond the stage where it makes any sense, if it ever made sense. I mean, come on, Dresden has been stuck on an island in a cave for a year (at least) when this book starts but, yet, Dresden is still up to date on the latest pop culture references. And, yeah, it's funny (to an extent) but, now that I've noticed that Dresden shouldn't be aware of any of this, I can't get it out of my head as I read. Plus, in this one, the parkour joke ran on a bit far. Running jokes should be more related to sprints than to marathons.

So, yeah, that's the biggest fault I found with this book. In fact, this is the first book in a while where I felt Butcher was really hitting his stride (and we all know how long Dresden's legs are, so that's saying something), again, with Dresden, pop culture aside. Maybe it was dealing with the Nicodemus and the Denarians again or, maybe, it was having Michael back. Maybe, Butcher was just hitting the right beats. Maybe it was the absence of vampires, not that I don't like Thomas, but there have been a lot of vampires for a lot of while in these books, and there wasn't anything like that this time. No stuff with the council, either.

Oh, wait, there was one other thing:
A clever author will hide a twist in a story in plain view by giving you the pieces of the puzzle but in such a way that you don't really know what you're seeing or how to put them together. A good example of this is The Sixth Sense. When the reveal happens, you kick yourself and realize you should have seen it the whole time.
A not so clever author hide the twist by hiding the pieces so that you can't figure it out at all. Sure, I suppose you could guess the twist, but that's just guessing. A good example of this is The Illusionist, a movie which has, like, 10 minutes of flashbacks during the reveal to show you all of the things it didn't show you during the movie.
And that's what Butcher does here, stops and almost literally says, "Oh, here's what I didn't tell you about that happened earlier in the story." There are ways you can make that work but probably not in a first person narration where the narrator is the one holding stuff behind his back.

Anyway... I suppose I got over that bit fairly easily because I almost forgot to include it at all despite the fact that I was quite annoyed at that point in the book.

This book feels like it has a lot of significant events in it. Little events. Not huge things like when Dresden died or when Dresden became the Winter Knight but lots of little things, all of which would be spoilery, so I'm not going to mention them. And there's one thing that happened that the un-happening of is never mentioned, though it's kind of implied that the un-happening happened, but that also seems like it should be more significant than to mention that it happened, or un-happened, and I don't know if it's significant or not! And it's kind of niggling at me and I want to know what it means!

Well, as I'm sure I've said before, if you're a fan of the Dresden books, you're almost sure to like this one. If you're not a fan, it's probably because you haven't read any of the books. Or... well, I'll just say it: There's probably something wrong with you.
Posted by Andrew Leon at 12:00 AM