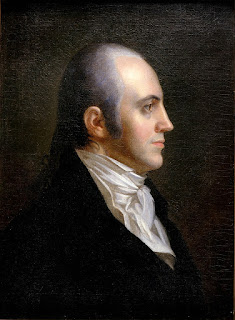 Obviously, I never knew Aaron Burr so never received any advice from him. I don't really know if he would have uttered the words, "Don't let them know what you're against or what you're for," or not. It doesn't really matter as it's the words I'm dealing with moreso than Burr. Well, moreso than Burr the historical figure. I'm definitely dealing with Burr, the character, from Hamilton.

That said, Burr was a despicable figure, a true scum-of-the-earth human being. And, for what it's worth, I'm willing to go along with Miranda's interpretation of him, on the whole, since it's based on Ron Chernow's book about Hamilton. I would say that Chernow is a more than reliable as a source.

The Burr of the Broadway musical is a conniving piece of trash, a man constantly playing the middle so that he can make sure he comes down on the winning side. A bit of historical curiosity for you: He's the politician who invented going door to door and getting out in the neighborhood, which was not exactly a good thing. He wanted to get people to vote for him because of how friendly he was, how personable he was, not because of what he stood for. He wanted it to be a popularity contest, something like running for class president in high school.

"Vote for me because we could buddies!"

When I was a kid, I was into GI Joe and Transformers. Mostly, I was into the toys, and I collected them and kept them on display in my room. One day, my mom was in my room talking to me about... something I don't remember... when she abruptly inserted, "I wish you didn't have all of these war toys." It was completely out of the blue and, while not exactly confusing, a little confusing.

So I said the logical thing, "Why?"

And she said, "Because if you were ever drafted, you wouldn't be able to tell them you're a pacifist."

Which totally blew my mind. I think I said something like, "Why would I want to tell them that?" I don't really believe in violence as an answer to things, but I'm also not a pacifist. It would never have occurred to me to try to lie to get out of being drafted like, you know, claiming to have bone spurs.

Which brings us back to this idea of keeping your political leanings out of your public life. Not that most of us have a "public" life but, as small as mine is, I do have a public life. The general "wisdom" among my "fellow writers" is that we should keep our politics and our personal beliefs out of our public lives. Rather in the same way that people are saying saying that football players should keep their protests out of sports.

Not that the two things are actually similar. People want football players to keep their mouths shut (or their knees unbent) just so that they don't have to think about what it's like to be African American in America. Writers tell other writers to keep their politics and beliefs to themselves because they'll alienate potential readers if they're open about what they believe.

And that's true. I know that I have lost followers since I started writing politics.

However! The trade off is keeping your mouth shut about the injustices in the world (or, if you're a Trump (#fakepresident) supporter, supporting and praising those injustices). You know why the Nazis succeeded in so much destruction? People kept their mouths shut. People played it safe. People tried not to draw attention to themselves. And you can pfft all you want at this being similar to a pre-WWII Germany, but you can only do that if you're ignorant of the history. Ignorant.

Look, here's the thing:
When I was a kid in school learning about World War II and the Nazis, everyone always said, "Oh, I would never have done that. I wouldn't have kept silent. I would have taken a stand. I would never never never have let anything like that happen or have been a part of it." Everyone said that. But we're in those days right now, the days when people need to stand up and protest fascism and racism and all of the abuses of the Trump (#fakepresident) administration.

In the end, I'm with Hamilton, "I'd rather be divisive than indecisive; drop the niceties."
Seriously, the Republicans have moved all of this way past "civility." Don't fall for that trap. It's just meant to get you to let them do what they want to do without complaining about it.
Posted by Andrew Leon at 12:00 AM