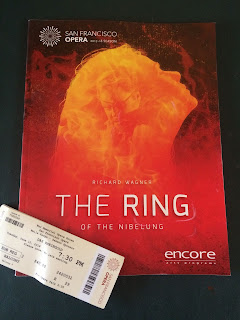 The Ring of the Nibelung is a lot of opera; there's no denying that. Opera isn't like going to the movies, even if they are a similar form of entertainment, and they are a similar form of entertainment. However, it does require quite a bit more concentration to take in something that's in a different language. It can be challenging, especially with something this long.

However, I also think it's worth it. Of course, that's from the guy who will slog through books and movies that I know I'm not going to like just so that I will have the context of it. Or to prove that it's bad. Or whatever. You can take what I say about opera, then, with whatever kind of salt you need to use. But I do like opera, both in theory and in experience. I think it should be a more widespread form of entertainment, and it would be if it could break its bonds of tradition that old, white people have it chained to. Old white people like that opera is seen as some kind of elitist entertainment because it makes them feel superior to other people who don't see opera. But that's a different conversation.

Having said that, I am no "Wagnerian." I didn't find the opera to be any kind of "religious experience," as some people describe it. I've actually been having a hard time coming to terms with that viewpoint, in fact, but, then, some people view Game of Thrones that way and, by comparison, Thrones is so far inferior it's difficult to even call it a work of art.

Which is not to say that The Ring doesn't have its flaws. It actually has what I would consider some pretty significant flaws, the central one being the Ring itself. For a Ring of absolute power, it seems to do very little and fails to protect its wearer at every juncture during the opera. Of course, it's no different than the way magic is used by most authors: It only works when the author wants it to and, for whatever reason, fails the user at plot-opportune moments. So this isn't a just a problem I have with Wagner; it's a problem I tend to have with authors in general, especially when they don't follow the rules they themselves have set up for their work.

Based on the scant knowledge I have of Wagner, I'm going to say that the Ring is a metaphor for technology and that he represents himself within the opera through the character of Wotan. Wagner was not a fan of industrialization and viewed it as somewhat of a curse upon the world, the same way Wotan speaks of the Ring once he has resisted his own temptation to wield its power to control the world (which I found puzzling because Wotan was already in charge of the world, so to speak, so it seemed a bit odd to me that he would, then, feel like he needed the Ring to be in charge of it).

Wotan is a seeker of knowledge and spends lifetimes searching out all the secrets and hidden places of the world. And hatching schemes. Through the first part of the Cycle, Wotan's efforts are going toward building up Valhalla and, by extension, the world. It's his desire to bring into being a champion, a hero, who can wield the Ring and not be corrupted by it. Then, suddenly, at the beginning of Twilight of the Gods, we find that Wotan has retreated into Valhalla and locked all of the gods in with him and is waiting to burn it all down using the wood of what is the equivalent of the World Tree. There will be no escaping for the gods.

Maybe it's the events in The Valkyrie that push him in that direction. It's hard to say because he's still around meddling during the events in Siegfried, but his goals may have already shifted at that point. At any rate, I find the idea of the only way to save the world is to destroy it to be chilling, especially in our current political climate in which so many people actually believe that. The fanatical religious Right, as a group, believe in the apocalypse as a form of salvation and do more and more to usher in a destroyed world, which seems to have been Wagner's view based on the ending of The Ring.

Needless to say, I don't really understand this idea of destroying something in order to save it, but I suppose it is very Biblical. The Flood immediately comes to mind. And Sodom and Gomorrah. It's even a view echoed by the character Delores in Westworld. But I just don't think it's okay to make that decision for someone else. Why should you get to impose your view of whether something is broken or not onto me. Well, you shouldn't.

The question of burning the world down to purify it is particularly relevant today. Much to my horror. It's a little weird to experience that same kind of thought in a piece of work dating back 150 years. It's more than a little weird to find how close we are, right now, to fulfilling Wagner's vision.
Posted by Andrew Leon at 12:00 AM