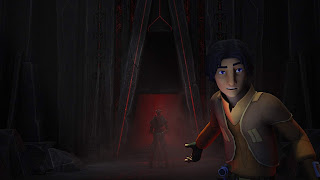 And now for the moment I've all been waiting for...!

It's Chopper versus an inquisitor, and Chopper...

Oh, wait, no. That's not what I've been waiting for.

I may have indicated in my review of Solo that I was quite excited by the reintroduction of Darth Maul into the movies. Not that I was ever one of those huge Darth Maul fans after The Phantom Menace. In fact, I wasn't all that impressed with Darth Maul. But, the truth is, he was never supposed to be dead dead. Lucas always intended to bring him back and the only reason he didn't come back in Attack of the Clones was because Ray Park opened his mouth about it within a few weeks of the opening of Phantom, so Lucas brought in Darth Tyranus instead. Still, I can understand people not being thrilled about him being brought back. Being cut in half is pretty final...

Unless you take into account that General Grievous was a heart and a brain and eyes in a robot body. I'm assuming that's all they were able to salvage of his organics. Compared to that, Maul was a veritable treasure trove!

All of that aside, I've found Maul to be a much more interesting character since they brought him back in Clone Wars. Not right at first, but, as they've gone along, they have deepened his character and complicated his motivations. I very much want to see what they have in store for him, and I am going to be sorely aggravated if we don't get the rest of the Solo trilogy, not for Solo but for Maul.

His first appearance here in Rebels is intriguing, which is about all I'm going to say about it until I get a chance to watch part two. I guess you'll just have to come back for that.
Or go watch it yourself.

"You don't exactly outrank me anymore."
"In my book, experience outranks everything."
"Then I definitely outrank you."
Posted by Andrew Leon at 12:00 AM