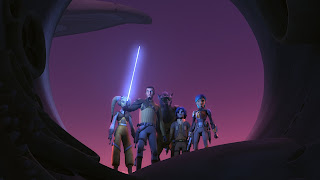 Man, I want to be covering these episodes more quickly, but I'm not being able to get them in more than one every few weeks. I feel like I need to take a page out of Ferris Bueller's book or really focus on that line from that Simon & Garfunkel song:
"Slow down; you move too fast.
You've got to make the moment last."
None of which has to do with this episode.

Though maybe the rebels are feeling that way, too...?

Unlike Clone Wars, Rebels is a pretty straightforward show most of the time. It's about what it's about: no layers, no subtext, no background plots. This episode is a bit more complex. On the one hand, they have a very Hoth moment with their new base -- you know, the one Chopper found -- but, on the other, emotional tensions are high because Kanan and Ezra are about to take off with Ahsoka to "deal with" the inquisitors.

One thing is for certain, though, all of them should have learned by now to never say anything like,
"This planet may be hot, dry, and unpleasant, but at least nothing's trying to kill us."
Because as soon as you do, something will start trying to kill you. Like this: 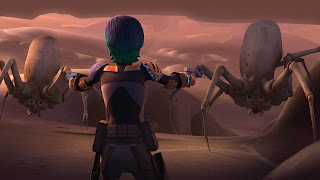 On a normal day, maybe it wouldn't have been such a big deal, but the emotional tension, especially between Hera and Kanan, really raises the stakes. Everything feels very... final.

So, yeah, good episode. I'm hoping this is leading to more complex stories in season three, though I still have a couple more in season two to get through. Hopefully soon...

"Trust me, Hera; I'm excited. This is my excited face."

"We can argue about this later."
"You always change the subject when I start winning!"
Posted by Andrew Leon at 12:00 AM