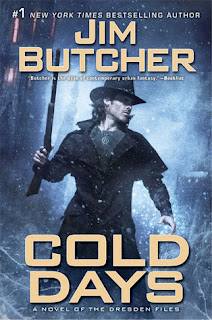 Wow! It has been a long time since I read one of these! More than three years according to the date on when I reviewed Ghost Story. Looking back, I remember that I had really wanted to get started on Cold Days pretty much right away, but, well, I didn't have the book yet, and, then, I continued to not have the book for, well, three years. heh I guess that's just how it goes sometimes. Besides, I've been reading other things.

Which I finally needed a break from, evidently, because most of what I've been reading has been on the heavier side, and the Dresden books, in my mind, are still categorized as "light reading." I may have to re-think that after this one, though, and probably actually should have begun to rethink that several books ago. These books are not so "light and fun," anymore, though I suppose I still would not call them heavy.

Obviously, Harry didn't stay dead. Or, well, wasn't quite dead. At any rate, he's back in the land of the living. Although I would guess that we haven't seen the end of the ghost world based on the way that Butcher tends to bring things back around. This book is another example of that, bringing threads back in from all over the place from earlier in the series. It keeps it interesting. You can't ever just be done with one of the books, because it all seems to matter.

That's a good thing, by the way. At least it is in my book.
heh

Maybe it was the long break I had from the Dresden books, but I feel like I enjoyed this one more than I did the last few, though, looking back at my reviews and ratings and things, that's probably not actually true. Except for Turn Coat; that one was definitely the low point of the series so far for me.

Although I will admit that the pop culture references did begin to wear on me after awhile. I don't think there were than in previous books, but it felt like he was trying too hard with them this time. I felt myself being reminded of the Xanth novels and how the quality of the puns went down as the series progressed; the quality went down as the frequency increased. It wasn't quite that bad, here, but I do have to wonder how Harry is able to draw on all of this pop culture seeing as how he can't really watch television and movies. Sure, I get some of it's from his childhood but, really, he's way too current for an isolated wizard. And, no, this isn't a big thing, just something I noticed this time.

The last book, kind of obviously, dealt with how Harry's friends dealt with his death. This book deals with how they deal with him still being alive after thinking he was dead. Who's moved on and who hasn't, so to speak. It's good stuff. Real emotions and all of that. Mostly, it doesn't skimp. Except maybe with Thomas. That seemed a little rushed.

Overall, great addition to the series. He got me with the ending again. I'm a pretty savvy reader and am not frequently surprised at endings, but this two in a row where Butcher has managed to squeeze somethings in that I didn't anticipate. At least one of those things, I probably should have, but, then, all you of you probably should have, too, but I bet you didn't see it coming either. He did a good job of setting that up. I'm looking forward to the next book, Skin Game, and, this time, I already have it!
Posted by Andrew Leon at 12:00 AM