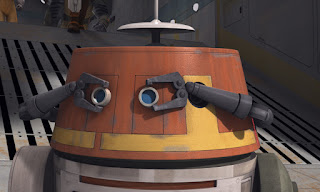 One thing seeing Solo has done for me is renewed my interest in Rebels, not that my interest had waned, I just haven't had a lot of extra time, lately, for watching anything. But, after the reveal at the end of the movie, I was reminded I needed to get back on this show. And, then, one of the first things my son said to me as we left the theater was, "Dad, we need to start watching Rebels again." Apparently, I couldn't agree more.

Historically, episodes centered around droids have not been my favorites, which is unfortunate since I really love R2 and 3PO. They just never seem to stand up to the spotlight being directly on them. Such was not the case with Chopper. Not this time, anyway. And it seems the writers wanted to give us a bit about Chopper's backstory.

The stuff dealing with droids and their societal condition is pretty interesting, all things considered, and this episode was a good one to go along with the recentness of Solo because of it. Chopper becomes... acquainted... with an Imperial protocol droid, and it's immediately clear that there is a marked difference between the condition of the droids on the rebel side -- or, at least, Chopper (and R2 and 3PO) -- and the droids on the Imperial side:


Free will sounds nice. I admire your fortitude.

It's good to be reminded that the droids are sentient beings and that their restraining bolts serve as nothing more than slave collars.

And, sure, the droids are manufactured beings, but is it okay to enslave a sentient being even if it's a being you built? It's an interesting question and one I'm sure we're soon going to be dealing with on a practical level and not just a hypothetical one.

"The entire rebel fleet is betting on Chopper."
"Yeah, try not to think about it."
Posted by Andrew Leon at 12:00 AM