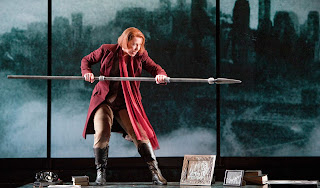 "Ride of the Valkyries" is one of the most famous pieces of music in the world. It's entirely memorable, and it's been used in everything from Apocalypse Now to Looney Tunes, so it would be surprising if you've never heard it. I have to say, the arrival of the Valkyries in this production was amazing. They came in by parachute! Okay, not exactly literally, but they "fell from the sky." On parachutes. Amazing.

The Valkyrie is a jump ahead from The Rhinegold. Some unspecified amount of time jump. Long enough ahead that Wotan has a whole slew of kids, all grown up and immortal. Well, most of them are immortal. Two of them, twins, are the offspring of some mortal woman Wotan decided to have a fling with and are not, therefore, immortal. And they don't seem to have gained any specific benefits by having a god as a father, either. Fricka, Wotan's wife, isn't happy about any of Wotan's offspring, since none of them are hers, but she's especially not happy about Siegmund, one of the twins. He's Wotan's favorite and, evidently, the only male offspring Wotan has. At least, he's the only male mentioned.

Still, everything might have been fine except... well... Look, Siegmund and Sieglinde were separated as young children and hadn't seen each other in, like, two decades when they came across each other. It's not exactly their fault that it was love at first sight. Except that, after talking about their fathers, they come to realize it's the same father and realize they're twins and, instead of having an "ewww! gross!" response, they're like, "We're twins! Even better!" As my wife put it: twincest.

And thus ends Act One.

Which left us with a crawly feeling and me wondering if we were somehow watching Flowers in the Attic by mistake. I mean, was this a thing Wagner felt was okay?

But, no... Well, at least, maybe not. Act II does pick up with Fricka questioning the morality of twincest. Of course, she's using it as a ploy because she hates Siegmund, and Wotan defends the relationship because "they're in love." It's difficult to know where Wagner actually stood on the issue from the content of the opera (and I'm not going to go researching Wagner's life, at the moment; I don't care about it that much). At any rate, it's an interesting plot point for the opera, especially since everything that happens after could have been accomplished if the twins had, well, not been twins.

The real takeaway from Die Walkure is that Wotan is a horrible father. He abandoned Siegmund and Sieglinde before they were old enough to know who he was, and he doesn't have any care at all for Sieglinde. Siegmund might be his favorite, but it's only from a distance. His other children, the Valkyries, are just tools in his quest to fill Valhalla with heroes with which to defend it. Brunnhilde is the only one of his children with whom he has any kind of relationship, and he uses her more harshly than any of the rest, in the end stripping her of her immortality -- among other things -- and that was a punishment for her doing what it was that Wotan wanted her to do.

Greer Grimsley is one of the best opera performers I've seen at this point. Wotan is an asshole. Wait. Wotan is an Asshole. And, yet, Grimsley manages to play the character in such a way so that he's also sympathetic. He's doing horrible things to people and manipulating... everything... and you feel bad for the guy. It's like in Infinity War when Thanos throws Gamora down in the pit as a sacrifice except Grimsley makes you feel bad for Wotan as he's cursing Brunnhilde. I never felt bad for Thanos. Huh. There's a lot in the whole Infinity War plot that very much resembles the Ring Cycle. What did I tell you about the influence on pop culture this piece has had?
Posted by Andrew Leon at 12:00 AM