At the Mountains of Madness (a book review post) 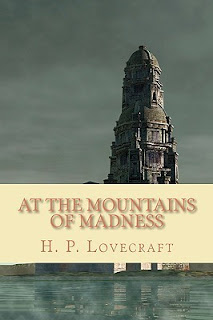 Yes, I'm still working my way through Lovecraft. No, I wouldn't recommend him to anyone else, not in general. There are a few, just a few, stories I'd suggest for anyone wanting to try him out. This is not one of them. Especially not at its length.

Funnily enough, when Lovecraft wrote this story, it was considered a novella but, by today's standards, it's novel length. It's more than 12,000 words longer than his next longest story and, I'm pretty sure, he could have cut all of them out. All of them. No, Lovecraft is not an author who gets better with length; he just gets more repetitive. I mean, it's possible that all 12,000 of those words are instances of "cyclopean" (one of Lovecraft's favorite words) and "decadent" (a new favorite for this story (seriously, if I ever again hear the term "decadent statue," it will be too soon (What even is a "decadent statue"? Lovecraft never says. He just tosses in the descriptor at some point to differentiate between the earlier statues))).

I did have hopes for this story when it started out. For one thing, it has a new setting. A new setting for Lovecraft, at any rate, though it's not really a common setting: the Antarctic. And it starts out well enough as Lovecraft goes into the scientific mission of the team and setting up the base camp and all of that but, of course, there's an unexpected discovery and everything goes horribly wrong.

Also, of course, the narrator isn't present for any of the action. That's how Lovecraft do. But what that does is forces the author to only tell you what happened, never to show it. It just gets boring after a while. Even when Lovecraft puts the narrator into the action, it ends up being passive. The narrator gets scared and runs away and never even sees what he's running from. His companion does, but that thing, whatever it was, is never revealed. You just have to trust that it's something really scary. So scary that the narrator's companion can't speak of it, another trick of Lovecraft's: the nameless terror.

It's so old, Man! Get a new trick.
Oh, no, wait, this is one of Lovecraft's last pieces, so it's not likely that he's going to find any new tricks.

The real problem with the story, though, is a thing a lot (maybe most?) of sci-fi authors have a problem with: I came up with a really cool idea and I want to tell you all about it even though it has nothing to do with the story and my character has no reason to know anything about it. Like a Joe Shmoe explaining how warp drive works or something. Of course, Lovecraft has to surpass everyone else and spend half of his book explaining something that his character shouldn't know, the back story of an alien race.

Sure, Lovecraft tries to make it plausible for his protagonist (I use that term loosely since the character does nothing more than walk around then run away) to know what he knows, but it's a ridiculous supposition, and you have to have severe cognitive dissonance to believe that his character could decipher and read the entire history of this race in the short amount of time allotted to him to do so by Lovecraft. It hurt my head, actually, trying to pretend that I could go along with the idea long enough to finish this "book."
Posted by Andrew Leon at 12:00 AM