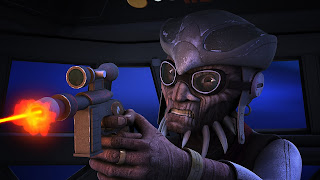 "We were enjoying a friendly game of sabaacc and, well, now, it's my ship."

With one episode, Rebels won my heart. Hondo Ohnaka was one of  my favorite side characters from Clone Wars, and it's a delight to have him show up here. Don't get me wrong, I'm not saying he was my favorite side character, but he was definitely top three. I hope this is just the first of many episodes for him to show up in. [Evidently, he still has the best writers. So many great lines!]

"Oh, the stories I could tell, so many of them true."

Ezra's having a hard time dealing with all of his responsibilities. On top of learning to use the Force and all of the other things he has to do to be a part of the team, Rex is now working on teaching him how to be a soldier. It's more than a bit overwhelming, which is what leads to running into Hondo. Ezra takes a... day off. So to speak.

Nothing philosophical. Not really. Just a fun episode. A romp, if you will. Definitely worth a watch.


"Well, that's another version of the story; I suppose."
Posted by Andrew Leon at 12:00 AM