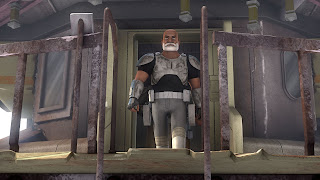 "There are questions, questions that need answering."

With those words Ahsoka is off to delve into the mystery of the Sith Lord she encountered last episode because, yeah, she doesn't know that Vader is Anakin. That conveniently takes her out of the picture for the moment, leaving our own little rebel band to go off on their own mission.

So... Ever wonder what happened to the clone troopers after the end of the Clone Wars? Did they end up on street corners holding bean cans while begging for handouts? I can't answer that question for you, not in a general sense, but we do get to find out what became of Captain Rex. Turns out he's on my least favorite planet in the galaxy. Oh! and hey! Gregor survived! Well, more or less. You remember him, right? The best part of my leasy favorite Clone Wars story arc ever.

The problem with all of this? Kanan was there when the clones turned on the Jedi. He watched his Master gunned down by clones she had served with for years, and he ran as they turned to do the same to him. They are both his betrayers and his reminder of his own guilt. Should be some interesting stuff if the clones stay around long enough, though there may be more betrayal in the offering.

Personally, I hope Rex stays around, and I hope we find out what happened to Cody, too, though I suspect nothing good if he's not with Rex.

Oh, and Zeb gets used as bait. Like worm bait.
Posted by Andrew Leon at 12:00 AM