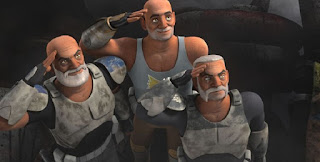 I'm a bit reminded of Howl's Moving Castle with this pair of episodes. The clones live in an old Republic tank, travelling slowly around the desolate planet they live on. There are things, like laundry, hanging off the outside of the tank. Being just a 20-minute show, they don't spend much time delving around the innards of their home, but there's just enough there to make me wish that they had. The fact that Gregor's kind of crazy just heightens that desire. I mean, who knows what kind of stuff he has stashed in odd corners inside that thing.

The only problem in all of this is that someone called the Empire. "Hello, we have a Jedi here..." As if Kanan didn't have enough against the clones already.

But it does give us a chance to see the clones scoff at and make fun of their first AT-ATs. That was a fun moment. Oh, come on, it's not anything people haven't said before, so it's good, I suppose, to see the creators making fun of their own thing. And what do AT-ATs care?

All of that, and a new Inquisitor is coming to town... 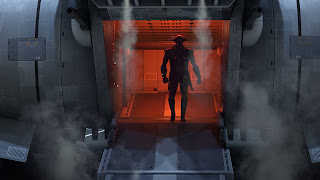 So far, season two is shaping up to be far superior to season one. The themes being introduced are much more mature and interesting than the rather juvenile season one. Which is not to say that I don't expect there to be more juvenile hi-jinks, because even Clone Wars had its more juvenile moments.
Posted by Andrew Leon at 12:00 AM