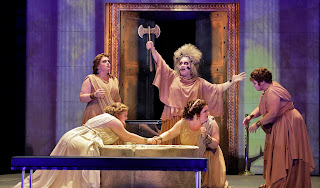 The first thing I can say about Elektra is that it was not my favorite opera. It also was not my least favorite opera, but it's much closer to that end of the spectrum. Unfortunately, that was all about the music. It was like this relentless, grinding machine that just wouldn't stop. And, since the opera is just one act -- one long, two-hour act -- it really, literally never stopped. Until the opera was over, that is.

Unfortunately, it kind of puts me off of Strauss, which may not be fair, exactly, since it seems that Elektra was part of his experiment into modernism. Not all of his operas are like this, basically with the whole thing done recitative (which you may remember I also didn't like in Usher House (still at the bottom of the list in ranking the operas I've seen (not that such a ranking exists but, if it did, Usher House would rank last))), but his most famous and most performed are. So I don't know what that says about me, especially since this particular production seemed to get rave reviews.

Just not from me.

Having said that, there are some good things to say about the production. For instance, the set was interesting. They chose to set the piece in a museum which was holding an Agamemnon exhibit. Elektra hides so that she can get locked in over night. So that's interesting, yes, but, overall, that didn't work for me either, despite that it looked really good and they had sliding rooms and stuff.

But the opera is clearly set in Elektra's family household (where she's basically being held prisoner by her mother), so the bedroom and kitchen and other rooms of that nature that slide into the museum broke the structure of the narrative for me. The two things didn't go together. Plus, to go along with the museum atmosphere, Elektra is supposed to a kind of goth kid rather than a half-starved prisoner, which would have been fine if the opera itself didn't refer to her appearance on multiple occasions. So... "A" for effort? I don't know...

Unequivocally, the performances were very good, especially Christine Goerke who played Elektra. She's on stage the entire time, most of it singing, so it's an impressive amount of work. Even though I didn't like the music or the presentation, I could tell that the actors did a great job.
I'm cool like that.

Oh! Also... The opera is supposed to end with some big death dance by Elektra but that didn't happen. It's supposed to emblematic of the special kind of crazy from which Elektra is suffering, so it's kind of important, I would think. Instead we just got some vague arm waving by the actress. Maybe she can't dance? Maybe the director didn't think it fit the tone of his presentation? Whatever the reason, I was let down.

So, yeah, whereas most of the operas I've seen so far I would like to see again or, at least, would be willing to see again, this is one that I'll avoid in the future.
Posted by Andrew Leon at 12:00 AM