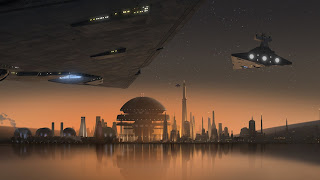 "I guess there is no going home."

It's Rebels week here at StrangePegs, which means two thing:
1. There will be an episode of Rebels reviewed each day!
2. No politics this week.
Except that it's Rebels, so there's a good chance there will be politics.

So... Kanan isn't happy. His and Hera's small rebel band of hooked up with the larger Rebel Alliance after the events that ended season one, and Kanan is feeling uncomfortable being a part of a larger organization. And taking orders. He really doesn't like having to take orders and be part of a chain of command.

Probably, he doesn't like having Ahsoka around, either, but that's just me saying that.  It doesn't come up in the episode.

Vader's not happy with the fact that our group has joined the larger organism, either, but that's because they're not on Lothal anymore, and Vader wants them back. Which means a plan...

Remember The Empire Strikes Back and that whole part where Han and Leia go to Bespin and... it's trap! This is kind of like that. Vader knows what's going to happen since, you know, he can see the future and all, which makes it a bit unfair. Evidently, Kanan never progressed in his training enough to be able to get glimpses of the future? I don't know. It's not a thing all Jedi can do, anyway, so maybe he just doesn't have that skill.

But, anyway, part of what happens is that Vader and Kallus order Minister Tua to make things... difficult... for the population of Lothal. This also echoes Empire; however, Tua doesn't have the stomach for it. Although she's a good little Nazi, um, Imperial agent, it seems that there are some things that go beyond even her ability to condone, very unlike our very own Republicans who seem just fine with rape as long as it's a good Republican boy doing the raping. [See, I told you. Politics.]

This episode is a good start to the season, and I didn't want to stop watching to write this.
Posted by Andrew Leon at 12:00 AM