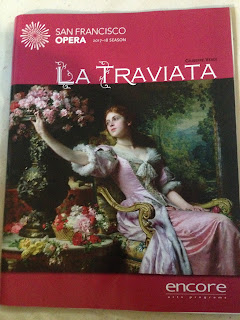 We all know that entertainment is subjective, right? Probably the most subjective thing there is, even more so than food. What's the best movie ever? You're not going to get any good agreement on that. Or the best book. Or pretty much anything else. Except, maybe, opera. If there is a "best" opera, La Traviata is probably it. At least that seems to be what the data suggests.

Not to get into the somewhat complicated history of the piece but, since its second performance  in 1854, it has consistently been the most performed, most requested, most viewed -- if there are other mosts you can think of, probably those, too -- opera each year. At this point, it's probably the most watched opera of all time. It's that popular.

Well, okay, to get into one piece of its complicated history, the first performance was -- I don't want to say sabotaged, because that wasn't the intent, but it was kind of sabotaged -- by the producers of the opera, because they insisted on a particular performer for Violetta and forced Verdi to use her over his objections. The audience found her less than compelling as the protagonist and reacted unfavorably to the performance. It was more than a year before Verdi allowed La Traviata to be performed again, this time with a singer of whom he approved. The second performance, as noted above, was a rousing success.

I find this particular opera fascinating, not least of which because it was based on a novel by the son of Alexander Dumas, also Alexander Dumas. I had no idea. So, now, I'm all interested in his work, which is not to say that I'll get to it any time soon, but I'm interested.

Having said all of that, I wouldn't say that La Traviata is my personal favorite opera, not that I could name my personal favorite, but I'm pretty sure this was not it. I didn't get lost in the performance as I have for a couple or few of the others. I did very much enjoy it, though. Top five for sure.

To some extent, that is due to the story, the story of a young woman who sacrifices her own happiness to facilitate the happiness of someone else. Which is not something I have a problem, because I think that too many people are unwilling to make even small sacrifices to help other people. However, in this case, she was asked to make a sacrifice to satisfy someone else's selfishness, and that's a thing I have a problem with.

"No, I could never give up my sheep. I love my one sheep."

"But I won't be happy unless it's mine."

"Are you sure you won't be happy? Well, okay, you can have my one sheep." >dies of a broken heart<

Actually, this sounds a lot like the Republican party, right now. "Look, we know we and all of our super-rich friends have all the money, but we really won't be happy until we take the tiny bit you have, too."

Yeah, sure, this is not a direct analogy, because the opera is a love story, but it's close enough. What I wanted was for Giorgio to do the right thing early enough to matter, like going and slapping the dude his daughter was supposed to marry and telling him to go fuck himself. Of course, that didn't happen.

SFO has been running this particular production of La Traviata for something like 30 years, and with good reason. It's definitely worth seeing. Not this production but the one prior, was, in fact, the opera that caused my wife to fall in love with opera, so I'd say if you ever get a chance to see it, you definitely should.
Posted by Andrew Leon at 12:00 AM