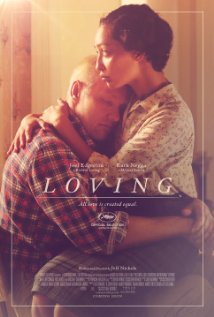 There are times when a completely appropriate title shouldn't be used, usually because it's misleading. Basically, a title should tell you something about the story being presented and, though Loving is appropriate to the story, the word itself is so generic that it tells you nothing about what the story is about. However, that's the worst thing I can say about the movie, which is a pretty minor thing, all things considered.

So what, then, is the film about?
It's about the supreme court case which struck down anti-miscegenation laws in the United States. Except it's not really about the court case, as would be the tendency for films like this. What you would expect is a courtroom drama focusing on the lawyers and the case itself, a movie making the lawyers the heroes. This movie, though, deals with the people: Richard and Mildred Loving. See the reason for the name?

I think, often, we forget about the people. This event in history was about people, brave people, not a court case. A white man who loved a black woman and wanted to marry her. Did marry her. Bought a piece of land on which to build her a house. A piece of land that, at least during the time frame of the movie (which covers many years), remained fallow... because they were arrested for being married then forced to move out of Virginia for refusing to get divorced. It was that or go to jail.

Ruth Negga and Joel Edgerton are both great in their roles. Richard, being a white man, is released from jail not too long after being arrested, but they wouldn't release Mildred without holding her for a weekend, first, and they wouldn't allow Richard to bail her out at all. Nor allow him to see her after she is released, not unless they wanted to go back to jail. The distress of Richard during this portion of the movie is palpable on Edgerton. He has no recourse. No money. No education. But he is being denied his wife.

Ruth Negga brings a quiet strength to the movie. She doesn't know what to do anymore than Richard, but, once the bridge has been crossed to take their case to court, Mildred is the one who stands steadfast in seeing it through. Negga brings that determination to the role.

It would be nice to think that the kinds of things, the kinds of racism, in this movie are things of the past, but I think it's clear from what has happened in the politics in the United States over the past year that this kind of racism is alive and well and that there are people who would, once again, persecute a quiet, loving couple like this for nothing more than wanting to be together. In that respect, this movie is very timely and highly recommended. It reminds us that this fight, this fight for racial equality, isn't over.

[And this will serve as my political post for the day, because, even without being so, it is a very political movie.]
Posted by Andrew Leon at 12:00 AM