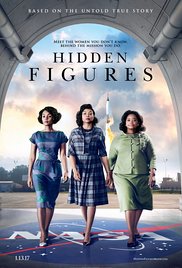 I know that I just got through saying that I had found my pick for Best Picture winner this year and that I didn't think that would change. Well, I was wrong. I'm glad I specified that I hadn't seen all the likely nominees yet, and even I am surprised that I'm going with Hidden Figures over Arrival. That should tell you just how good Hidden Figures is because Arrival is in just about every way my kind of movie. What can I say? I like sci-fi in my movies.

Or, maybe, I just like science, fiction or not, and Hidden Figures, also, pushes the science button.

Hidden Figures feels to me like a necessary movie for our time. But it's also just a great movie. Great and necessary is a combination that is difficult to overlook.

We have this pervasive view that every important accomplishment not just in the United States but in the world and throughout history has been done by white men -- I mean, we even hold the view, somehow, that Jesus was a white dude; how fucked up is that? -- and that's just not true. It's not even mostly true. And, yet, here we are.

Would we have gone to the moon without the contributions of these three women? Probably. Would we have done it when we did? Almost certainly not. Would the Russians have gotten there first? Maybe.  And, no, it doesn't matter that they have never been. They cut their program back once we had taken a lead that they could not overcome but, if we had never taken that lead, they very well may have retained theirs. Katherine Johnson was instrumental in us taking the lead away from Russia.

But why should we care about one individual mathematician among so many? It's not like we know the names of all of the faceless white dudes in white shirts working for NASA at the time, right? However, if you had looked into that room of faceless white dudes in white shirts, you would have noticed one person who didn't seem to belong, and that is significant. One lone African American. One lone woman. The same person. That she was allowed into that room at all is significant because that means that she was extraordinary, and she deserves recognition.

All three of the women do.
So it was way past time for this movie.

Add to the great story a top-notch cast, and you have what is a wonderful movie. There were seriously great performances all around. That said, two in particular stand out to me:

The first is Janelle Monae (also appearing in Moonlight). She is feisty and fiery as Mary Jackson, and I actually wish there was more of her in the movie. It's a completely different kind of role than she had in Moonlight, too, so it's cool to see her range in these two movies. In fact, I didn't even recognize her as the same actress while I was watching the movie. It's really a stand out performance.

And I hate to highlight a white dude from a movie like this, but Costner's performance as Al Harrison was... well, I'm not going to say it was amazing, but it might be Costner's best role ever. Harrison is an interesting character (which is all I can say since I don't know anything about the actual person), the only one of the group that Katherine Johnson is assigned to who appears to not be racist. He's just oblivious. But when he does take notice of the racism happening around him, he does his best to smash it, sometimes literally. At one point, Costner delivers what seems to me would be an awkward line -- something like, "At NASA, we all pee the same color." -- but he does it with all seriousness and sincerity, and it's a great moment in the film.

Most of all, though, what sells me on this film as the Best Picture is that I would say everyone should see this movie. I wouldn't say that about Arrival, because I know a lot of people who, for many different reasons, wouldn't get the movie. Or enjoy it. It's like my view of Tolkien: I believe everyone should read The Hobbit, but The Lord of the Rings is certainly not for everyone.

So, yes, go see Hidden Figures. If it doesn't give you a fresh perspective on racial inequality in the United States, there is, beyond any doubt, something wrong with you.

[Again this week, the movie review will serve as my political post.]
Posted by Andrew Leon at 12:00 AM