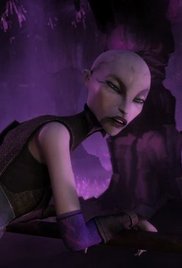 -- Who we are never changes; who we think we are does.

Asajj Ventress is alone and on the run after Dooku's second or more attempt to have her killed. Trying to both survive and lay low, she ends up in Boba Fett's gang of bounty hunters. Despite his young age (and lack of Mandalorian armor), Fett is already in charge. Both Bossk and Dengar are in the gang.

This episode has ninjas. Or close enough.

And Simon Pegg does the voice of Dengar.

As opposed to the previous arc, which included a lot of bounty hunters who were fairly superfluous to what was going on, each member of Fett's team has a place and a use. They didn't feel like mere window dressing. As such, this was a really good episode. We get to see them all in action and see some of their personalities. It probably helps that we already have some familiarity to Bossk and Dengar, and it's nice that they are not just standing around in the background.

It's a good episode. Part of an arc, yet able to stand on its own. We get to see more of Fett's evolution, which is interesting. I hope they some day do a solo Fett movie but, until then, it's nice to have his background explored somewhat in Clone Wars.

Also, Ventress may not be quite as mercenary as she would like to think.
Posted by Andrew Leon at 12:00 AM