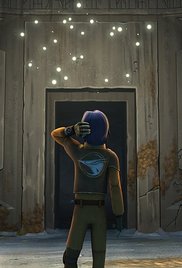 Kanan is forced with a difficult decision after the events of "Gathering Forces." Has Ezra touched on the Dark Side? Has he stepped onto the path? Is Ezra still capable of becoming a Jedi? Kanan needs to know. He needs a Jedi Temple...

So he has Ezra find him one. Through communing with the Force.

And, then, Ezra has an experience very reminiscent of Luke's experience in The Tree on Dagobah.

On the one hand, it's all very cool. It's a good episode in that respect and brings up a lot of questions (like "What has Kanan been doing since the Purge?") that I hope we get to see answered. Ezra's experience in the Temple is well done and is very revealing about him as a character. It's a great step forward for the show and it definitely has my attention (and approval) at this point. Although still obviously geared for kids, it has stepped above being merely a "kids' show."

On the other hand, there are some things I find annoying in a more global sense. What we know about Star Wars in general is that Anakin was the most powerful Jedi ever, even more powerful than Yoda. That is, until Luke was born, and Luke is supposed to be even more powerful than Anakin (even though no one ever took his midi-chlorian count), but what we're seeing from Ezra is stuff that goes way beyond Anakin or Luke. Stuff that makes Kanan fearful of his ability to teach Ezra.

From a global story perspective, you are driven to do this kind of thing, because the natural inclination is to take things to the next level, not show things you've shown before, but I think you can do that without making each new character the most powerful ever. So I hope that's not what they're doing, but it does look like it's headed that direction.

Still, taken in the context of this one show, it's very good, and I am, now, looking forward to each new episode we have time to watch.
Posted by Andrew Leon at 12:00 AM