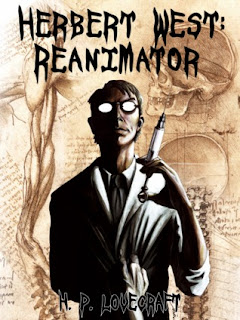 This is by far the longest piece by Lovecraft that I've read so far. Not because I'm avoiding his longer works but because, after reading several of his short stories, I decided to read his works in the order in which he wrote them. I don't know; I guess I just wanted to see the evolution of his writing.

It is in some ways disingenuous to say that this is a longer work. It is in actuality six short stories about the same two characters, Herbert West and his narrator assistant. Each story begins with a somewhat distracting recap of events which is meant to string the events of each episode together into a coherent whole. This is only partially successful as there is no need to have read any of the stories to be able to read any of the other stories except for the last one, "The Tomb-Legions," which requires that you have read all of the other pieces.

I have to say that this... I don't know, let's call it an experiment... was unsuccessful. Lovecraft called the story a parody of Frankenstein, but I don't think it succeeds even at that. It's too clumsy, both copying the novel and being unrelated to it at the same time. And, in the end, Lovecraft pulls in some of his unexplainable otherworldly esoterica to draw the story to an unsatisfying conclusion which is so unrelated to anything in Frankenstein that it manages to undermine any claim that this is a parody.
It turns it into a poor attempt at stealing this particular story idea, that of bringing the dead back to life.

Lovecraft has some stylistic choices which specifically don't work in Herbert West:
1. Lovecraft is a "teller," not a "show-er." This robs his stories of immediacy and works against them being true horror. They might leave you feeling creepy, but it's difficult to ever feel any real fear for the characters since everything is told from some far removed point to the actual action.
2. He almost never uses dialogue, resorting, instead, to just telling us what was talked about. This follows point 1.
3. He cheats on descriptions (CONSTANTLY!) by telling us it's too unspeakable for words. Sorry, as a pattern (which it is), that's just deficient writing skills. Every once in a while, that can work to heighten just how horrible something is, but, when that's your go-to descriptive phrase, it shows that you just can't come up with anything.

The above points don't cause problems in any individual short story, but they cause longer works to drag and become uninteresting. Thankfully, even as a longer work, Herbert West wasn't all that long, and I was able to finish it, but I was glad when I did. I kept thinking as I was reading, "Geez! Just get to the point!" Unfortunately, the point wasn't really worth getting to.