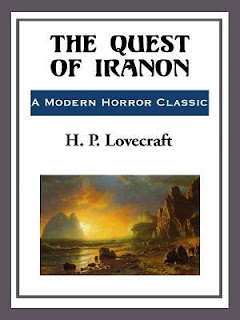 "The Quest of Iranon" is the most interesting of the Lovecraft stories I've read so far (I'm somewhere in the two dozen range). I'm not saying it's the best, but it's the only one that has give me a "huh, that was interesting" reaction. [Ignore the image. This is in no way a horror story.]

This will be full of spoilers and, actually, I'm going to ruin the ending, so you should go read it before going on with my review.

To put it simply, Iranon is a dreamer. He's a singer of songs and a teller of stories. And he's on a quest for his homeland, a land he remembers from his infancy, a land in which he was a prince. But he was for whatever reason left to be raised by another family, and he now seeks home.

During his journey, he acquires a travelling companion, a youth who wants to move on to a better place than where he lives, another dreamer, though not one who dreams as deeply as Iranon. They travel together for years, until the youth passes Iranon by in age and, eventually, dies, all the while Iranon ages not a day. There's no explanation as to why Iranon doesn't age, so it's to be assumed that it is because he is of a people of another place, a superior people.

This is the bit that's interesting to me (and here comes the real spoiler), because, at the end, Iranon, still on his quest, stays with an old man, an old man with whom it turns out he was friends with during his childhood. The old man only has distant memories of the boy, Iranon, who used to tell fantastic tales, tales about being a prince from a far off land, but tales that couldn't be true because he and everyone had known Iranon since birth,

Hearing the truth deprives Iranon of his eternal youth, and he becomes the old man that he really ought to be. The general interpretation of this is that Iranon had stayed eternally youthful because he was a dreamer, and that it is the death of his dream that causes him to grow old. I suppose this is a logical interpretation and it is what it presented in the story.

However, if you look deeper, it's possible to see that Iranon was only youthful in his own eyes. He was, for a while, a famous and popular entertainer in the city Oonai, but, eventually, the people turn to a new group of entertainers. It is pointed out in the story that these are young people. Iranon, no longer feeling appreciated, leaves the city. But, maybe, he's just grown old and he's the only one who doesn't see it. It's an interesting question.
Posted by Andrew Leon at 12:00 AM