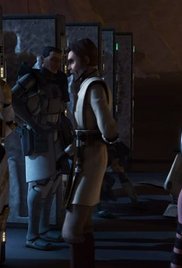 -- Adaptation is the key to survival.

At some point in the past, probably the far past, a prison was built -- it sounds like it was built by the Jedi -- to hold Jedi who turned to the Dark Side. Having been built to hold Jedi, it's a very secure facility, the kind of secure from which no one has ever escaped. I'm inferring from the presentation in "The Citadel" that the prison has been unused for quite some time. That's probably why the Separatists were able to get their hands on it.

It's also of note that the Separatists haven't put the prison to use holding Jedi any earlier than this, but that's probably because, really, they just kill Jedi rather than taking them prisoner. Mostly. Maybe it's because of Grievous' earlier failures at holding Jedi captive that Even Piell has been taken to the Citadel for torture and questioning.

We don't get a lot of background information on the Jedi in what is now canon material, so this is an interesting piece to pick up. Both that the Jedi at one time took precautions against themselves and that they haven't had to use them in so long that they have no recent records of the interior layout of the Citadel.

This is also what I think is the first meeting between Anakin and Tarkin. And Tarkin's first appearance in Clone Wars? I can't remember (having already watched the entire series before confuses the issue, and I'm not going to do the research, right now, to find out). At any rate, it's an interesting meeting and beginning to what will become one of the essential pairings in the Star Wars universe.

All of that and carbon freezing, too!


"Are you sure this thing is safe? I don't want to end up a wall decoration."
Posted by Andrew Leon at 12:00 AM