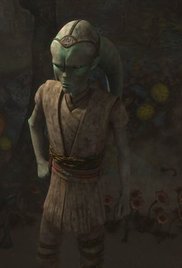 -- A great student is what the teacher hopes to be.

Continuing last week's story of Ahsoka's capture by the Trandoshans...

She's still captured. Well, if you can call being set loose on a planet to be hunted "captured." This episode adds a new wrinkle: Chewbacca!
It must be nice, actually, to have such long-lived characters that you can introduce them in various ways to different story lines within a property. And, hey, everyone loves Chewbacca and the wookies, and there is already an established animosity between the trandoshans and the wookies. the trandoshans being slavers and all and somewhat specializing in wookies.

Chewbacca is brought in to be a means of escape for Ahsoka, because they had established that there really wasn't any way for her or any of the Jedi younglings to get off the Trandoshan hunting preserve. We get a very E.T. moment as Chewbacca cobbles together a transmitter to call for help.

It occurs to me that these two episodes are a combination of story ideas: Ahsoka gets "misplaced" and the Jedi have to teach the natives to defend themselves. In this case, Ahsoka gets abducted then has to teach the younglings, who have spent their time just hiding and trying to stay alive, to stand up for themselves. To fight back. There are losses.

It's a good couple of episodes, but much more time is devoted to the action than to ideological thoughts behind what's going on. Which is fine. The action is good. I suppose I've just found myself in a more philosophical turn than usual. The ending... oh, okay, I won't spoil the ending, but it does provide a good lesson, so to speak.
Posted by Andrew Leon at 12:00 AM