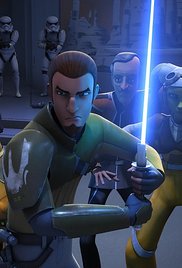 But, anyway, our rebels are all alone, operating completely independently of any other groups and without any kind of funding or support. They're doing it because they hate the Empire and what it stands for. That does not, however, mean they want to be operating independently of anyone and everyone else. In fact, they really want to be tied into a larger network. And this episode brings them that hope...

We also get to see one of Ezra's cadet friends from that episode where he went undercover in the academy.

The series is beginning to have the feel of being an ongoing story rather than being a series of single episodes, so that's good.