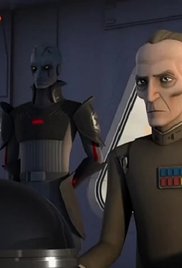 "You're finally getting the hang of this. There's hope for you yet."

What brings Tarkin to Lothal? Our rebels, of course. Because they have begun to be bothersome enough that a Grand Moff has to make a special trip to deal with them. This means nothing good for the leadership on Lothal nor for the Inquisitor, who has not managed to deal with Kanan and Ezra. Not that Tarkin believes that there's a Jedi involved, but the Inquisitor does, and he hasn't dealt with the issue.

Now, it's not like Tarkin is travelling around stopping on cells of rebel forces; he's not. Mostly, they are disorganized groups of what amount to terrorists. But not the group on Lothal. They're different, which is what draws Tarkin to the planet.

And the show really feels like it's coming together at this point with an actual direction and ongoing plot.
Posted by Andrew Leon at 12:00 AM