"Barachiel" Revised (or Done Or Raw) 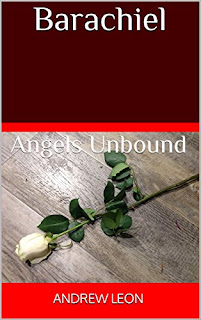 I mentioned recently that I lost a computer. As in, it passed away. It gave up the ghost. Well, if computers have ghosts to give. It kicked the bucket. Or whatever passes for a bucket. It went to the light. I know, because it quit making any of its own. It gave its last gasp. Which I actually heard. It's in cold storage, now. Literally. The hard drive is. It's in my freezer, kind of like Walt Disney, waiting for a day when it can be resurrected. Or, at least, have its data carefully removed like donated organs. I just can't afford that transfer, right now, because all of the "normal" means of data retrieval didn't work.

But this post isn't about that. Go back and read the other post if you want to know more about all of that.

I spent most of July restoring documents from other sources. That's an adventure, let me tell you. [Okay, it's not, really. It's like the complete opposite of an adventure.] One of the things I could not just restore from another source was "Barachiel." I actually had to buy "Barachiel" and re-type it from my Kindle. Which is the point of all of this...

There's a reason authors (and other artist types, I would assume) declare things to be finished. It's not because they are finished, not necessarily, but because there's a point when you have to decide to quit working on something because you are no longer making any notable changes to the piece, whatever kind of thing that is, from a painting, mural, short story, or novel. As my wife would say, "Done or raw, do the chaw."

Supposedly, that saying comes from Texas and passed down to her from her grandmother who grew up there. I, too, grew up in and around Texas, though, and I never heard that saying until my wife said it. I still think it's kind of weird. And, yes, Texas is a big place, and her grandmother grew up in a different part of Texas than I did. But I digress...

"Barachiel" is a good example of all of this, because, as soon as I started re-typing it, I started fiddling with it. Not that there was anything wrong with it, because there wasn't -- okay, actually, I caught two errors: one missing space (after a comma) and one missing letter (leaving only an "a," which can be a difficult error to catch, sometimes) -- but, now, even just a few months after writing it originally, there were phrases that, I suppose, I wouldn't say quite the same way. Evidently, that's true, because I changed some. And I added in a few things here and there. Why? Because I was looking at it again, and I couldn't help it!

That's why we declare projects finished and we don't go back to them!

It was right there in front of me, and it just happened.

If I picked it up two weeks from now, I'm sure it would be the same. And again two weeks after that.
Why?
Because we always change, and the phrases and words change, too.

So, no, there is nothing significantly different about the revised edition of "Barachiel," but, just because, I'm going to make it FREE! for a couple of days. If you've already read it, you can get the new version and compare and, if you haven't read it, here's your chance to get the ever so slightly improved version. For FREE!

So, yeah, go pick up your copy of "Barachiel" today!
And, as always, please leave a review!
Posted by Andrew Leon at 12:00 AM