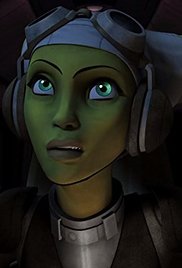 "Does yours do that?"

The crew of The Ghost receives information that Luminara Unduli may have survived the Clone Wars as a prisoner of the Empire. Kanan and Hera decide that they must mount a rescue mission to get her out. Not knowing of any other surviving Jedi, Kanan feels a special urgency to rescue one of the last great Jedi Masters of the Jedi Council.

There's also the fact that he's begun teaching Ezra, and things... well, things aren't going all that well. He believes that Luminara will make a better teacher than he. Ezra, of course, thinks that Kanan wants to get rid of him and that that is, really, the only reason for rescuing Luminara. Zeb doesn't help the situation.

Luminara is being held in a fortress of a prison. Impenetrable. Except to a Jedi like Kanan. Or, maybe, if it's a trap. Yeah, one of those.

So we have the actual first appearance of the Inquisitor, and the whole show just stepped up a notch. The stakes are suddenly real, and it's become more than just a kids' show. At least, this episode is. I guess I can't actually judge that, yet, but I have hope that the series just became something more than the casual misadventures of a young not-Padawan.

Oh, and the Inquisitor's lightsaber is pretty darn cool, kind of a cross between Darth Maul's and General Grievous.

If things continue forward like this, I'm going to like this series.
But it's still not The Clone Wars.
Posted by Andrew Leon at 12:00 AM