A Fire Upon the Deep (a book review post) 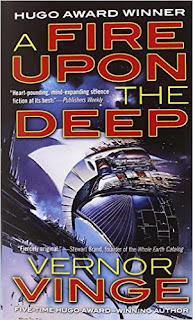 Sometimes, there are those books that you really just expect to love. Or, at least, to like a lot. They have all the things that you generally like in books. Or, at least, for that type of book. By all accounts, I should have really liked A Fire Upon the Deep, but it never really took off for me. You could say that it got stuck in the slow zone, especially considering it took me something like six months to read.

It's not that I hated the book, but it never achieved likability. It was like one of those foods you're willing to eat to be polite but, really, you'd just rather not. Like asparagus.

The first issue was the characters. Not that they were the first issue, exactly, but you can forgive a lot of stupid stuff in books (or on TV or whatever) if the characters are good. Good meaning that you can relate to them in some way and empathize with their situation. Or negatively empathize (as with an antagonist). But this book had zero characters with whom I could connect, so I never came to care about what happened to any of them. The only character I came even close to liking got killed not long after he was introduced.

And it was difficult to actually dislike the "villain," since it amounted to no more than a program.

Some would say the book is about the world building, which is extensive, but I didn't find that appealing, either. There were too many things that I found, well, just dumb. Like the galaxy having "zones." Not zones like you'd have on a map, but zones like the layers of a rain forest: floor, understory, canopy, emergent. The problem with these zones in the book (unthinking depths, slow, beyond, transcend) is that they were represented somewhat like evolutionary stages. Earth is in the slow zone but, once man had evolved enough, he moved up to the beyond, except it's the technology that's evolving, not man.

The problem with all of that is that the technology cannot actually physically exist (work) in an incorrect zone. Imagine it like this: You grow up in a kind of rundown neighborhood and all you have is a bike, but you work hard and save and, eventually, move to a better neighborhood and buy a house and a car. Let's say that one day you want to visit your old home, so you decide to drive by and see it just for the sake of nostalgia. The only problem is that when your car enters the old neighborhood, it quits working. It just shuts off. You could still put it in neutral and push it around the streets, but that would take a very long time and be a lot of hard work. Or you could build a bicycle mechanism into your car that you could switch to when your engine cut off.

I don't find this kind of thing fascinating to ponder, not in any way. It's a ridiculous approach to physics and the universe.

And not to spoil the ending, and I'm not actually going to tell you what happens, but you shouldn't read the next bit if you want to remain in the unawares:

It has a totally deus ex machina ending. That's not a problem in-and-of itself, because you know from the beginning, basically, that that's what they're looking for. However, when it happens, it goes all in and offers absolutely no explanation. The ending just happens. They show up and everything that is going to happen happens without them doing anything other than being there. And that, also, doesn't quite make sense, but there is no explanation offered. It was unsatisfying, to say the least.

And that was after the six-month slog to read it.

Probably, I will go ahead and read the next one, A Deepness in the Sky, but that's because I already have it. If I didn't, I wouldn't bother. And when I say I'm going to read it, I only mean that I'm going to start it. If it's not better, I'm not going to force myself through it like I did this one.

Note: This is one of the author's I decided to explore several years ago when I was doing the fiction to science thing for a-to-z. Vernor Vinge came up with the idea of the technological singularity, and these books deal with that. So, yeah, sometimes I read a book I'm not enjoying so that I can understand the impact of it (like Snow Crash, which was horrible, but, after reading it, I understand why people became so enthralled with it (hint: It wasn't the writing)). Trust me, it's not some weird sadomasochistic reading urge. I just want to understand the cultural significance of the thing.
Posted by Andrew Leon at 12:00 AM