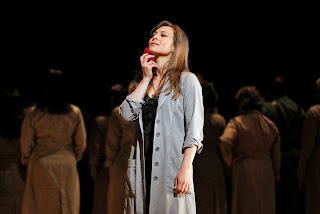 Irene Roberts as Carmen
I bet you thought I abandoned the opera, didn't you? Didn't you?

The opera happens in seasons, so there was a break in the performances. However, the odd thing is that this run of Carmen is part of the fall 2015 series. Performances start back up in the late spring/early summer, but the new season doesn't start until the fall of 2016. So, basically, the lack of opera posts has been due to a lack of opera. However, Carmen is the last one of the 2015 season that we're seeing. We bought the full 2016 season, though, so, once that starts in September, be ready for much more opera.

Carmen is one of the most famous and most performed operas in the world. 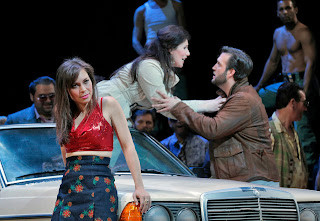 I'm sure you'll recognize some of the music:

Pieces of music from Carmen have been done in all kinds of places. I found a clip from Tom & Jerry, too, but I didn't care for that one in particular.

The pictures above are from the production that we saw, though they are not pictures I took. Cameras and such are not allowed during the performances.

This particular production strays somewhat from the traditional production style, or so they said. This is the only production of Carmen I've seen, so I have nothing to compare it to. The production was designed by Calixto Bieito, known as the Quentin Tarantino of opera. Yes, that means it was violent, but, honestly, I didn't find it any more so than, say, Lucia di Lammermoor. What I can say is that I really liked it. It was another performance where I occasionally lost the thread of the "dialogue" because I was too busy watching the show and would forget to pay attention to the "subtitle" screen. [They actually have a word for that screen at the opera, but I'm not remembering what it is, right now, and don't feel like looking it up.]

The stage was frequently filled with soldiers or gypsies or other characters, and they were always busy doing things that fit their characters rather than just standing around singing. Sometimes those things were humorous; sometimes they were on the horrible side. Either way, it made you want to keep your eyes on what was going on and, actually, torn between what you were paying attention to. It's the kind of performance that you could go see multiple times and catch something new every time. I like that.

The performance we saw featured Irene Roberts as Carmen and Brian Jagde as Don Jose. They did fine jobs. Actually, all of the performers did. There was no abandoning of the action to just stand in place and sing in this production. I like that.

There has been some debate as to what Carmen is about as in what it's about in relation to its metaphor. I'm unconvinced that the author of the original novella, Prosper Merimee, intended there to be a specific metaphor nor am I convinced that Georges Bizet, the composer of the opera, had one in mind. What Carmen is is a love story, a story of messed up love, and I think that's announced right at the beginning when Carmen sings a warning to any man whom she loves. She also says that she only loves the one who does not love her, but I think that was not quite the truth, unless Carmen is the representation of us all.

We learn at the beginning that there is a woman, Micaela, who is in love with Don Jose. Micaela is the woman that Don Jose wants, that kind of woman, but he can't quite see Micaela because he is blinded by the excitement and allure of Carmen, whom he thinks he loves. But Carmen does love him and, in an effort to have Don Jose prove his love to her, she asks him, a soldier, to desert his post and run away with her.

Don Jose balks and dithers, and the light of Carmen's love is instantly dimmed. If Don Jose doesn't love her enough to go with her, he doesn't really love her, and he certainly doesn't love her in that way that says, "You are the most important thing in the world to me." However, due to circumstances, Don Jose is forced to run away with Carmen and her gypsy friends. His love for her also vanishes due to the increasing resentment he feels toward her for putting him in the position that forced him to abandon his life.

That, of course, all changes when Carmen finds a new love...

Why does Carmen need to be about more than that? It's a fascinating love story all on its own without trying to make it mean something beyond the revelation of actual human nature. I might even find the novella it's based on and read it. As an opera, it was definitely time well spent.
Posted by Andrew Leon at 12:00 AM