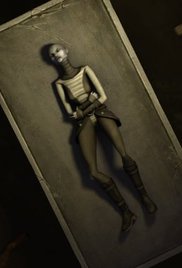 -- The swiftest path to destruction is through vengeance.

The first thing I want to say is that Asajj Ventress has a cool star fighter.
Oh, yeah, Ventress is back!

The second thing is that it's nice to be back on Dathomir, kinda like going home. Wait a minute, you say, we've never been to Dathomir. Well, that's true. But Dathomir was one of the planets available for exploration in the old Star Wars Galaxies MMORPG, and the Nightsisters are an enemy I'm familiar with. It's nice to see the home of the rancors finally make its way into Star Wars canon. Even so, The Clone Wars is not Galaxies.

When Asajj Ventress was first introduced, it was without any kind of back story. She just showed up and kind of demanded that Dooku train her (this was back in the original Clone Wars micro series in 2003), which he relented to do after she managed to impress him. Now, after years as Dooku's top assassin and most effective agent, Darth Sidious has decided that she has become a threat.

You know the whole Sith thing, right? There can be only two. During the Clone Wars, those two are Darth Sidious (Palpatine) and Darth Tyranus (Dooku), but Sidious has come to believe that Ventress is becoming strong enough as Dooku's apprentice that Dooku will be able to displace him as the master. For Sith, such displacement means assassination.

So Sidious calls up Dooku on the holophone and tells him to put Ventress down. Period. Prove his loyalty and kill her. Now.

Which is an interesting thing with the Sith, since it's common practice to kill your most powerful agents because they are your most power agents. You know, that's why Palpatine has Anakin kill Dooku rather than just take them both on as his apprentices, and, yeah, there's some history to why this is, but, right now, as far as I know, none of that is canon.

All of that to say that this episode takes us off on a new path in The Clone Wars, a path full of all kinds of interesting things and interesting characters. Oh, and there are a lot of light sabers in this one. It's definitely a must see episode.