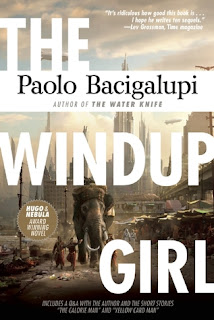 Imagine a world where genetic engineering is just getting started. Oh, like this one with our new glow-in-the-dark animals. (You have seen those, right?) Just a little farther ahead than we are now, though, and a brilliant scientist decides to make a Cheshire cat for his daughter for her birthday. It has complete camouflage abilities and can seemingly fade in and out of existence as it moves around. Sounds like a cute idea for a little girl who loves Alice in Wonderland, right?

Except... Except the Cheshire was just an augmented house cat, and it's new genetic abilities carried over in breeding almost 100% of the time. Within a few years, regular house cats had become extinct and replaced with a creature with uber stealth technology. The ultimate hunter. Birds, at least what we generally call song birds, had also become extinct.

They learned their lesson, though, and subsequent genetic creations were made to be sterile and given a hitch in their movements so that they looked like windup toys when they moved, hence The Windup Girl.

Paolo Bacigalupi has created a fascinating world with Windup Girl. It's detailed and textured in a way that few books are, and he does it without stopping to explain all of the science(fiction) to the reader. There's no break in the story where he stops and has someone explain how things work just so that he can show off how creative and cool he is for having ideas. The characters accept their world as real and, therefore, so do we.

The story is told in present tense, which is not something I generally enjoy (because, with many writers, it seems forced), but it works here. Mostly, I didn't notice it once I got going, and it provides a clean break for the very few flashback sequences which are, of course, told in past tense.

The characters are all very interesting but not all of them very likable. In fact, some of the protagonists actively work against each other, but there aren't really any "bad guys" in the story. Or rather, maybe all of them are bad guys. They all have their own motivations and agendas and there's no one thing that any of them are trying to defeat or overcome.

The book is a fascinating read with some very interesting ideas in it. It sucked me in pretty quickly. However, possibly because of the lack of a clear conflict, I wasn't satisfied with the ending. By the time I was about half way through, I began to worry about the ending, because I couldn't really see a path for him to bring  the characters through, and once I hit the three quarters mark, I was sure that I was right and that the ending would be the weakest section of the book for me, which it was. Well, except for the character who starts talking to a dead guy; that really came from out of nowhere, and I had a hard time with that character once that started happening.

Overall, I'd say it's a great read. It's good enough that I want to look into Bacigalupi's other books. Which I will.

Oh, also, the edition I read has two associated short stories at the end. I liked "The Calorie Man" quite a bit, but I didn't care for "Yellow Card Man." "Yellow Card Man" is centered on one of the characters from Windup, the character I liked the least (although I think he was supposed to be one of the more sympathetic characters), so I actually struggled to get through that one, even though it was just a short story.
Posted by Andrew Leon at 12:00 AM