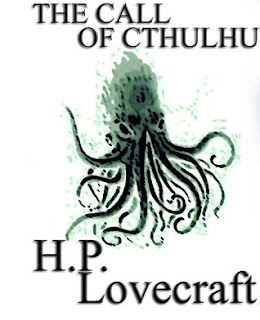 More than anything else, Lovecraft is known for Cthulhu. That, in and of itself, is extremely interesting because, other than a few other mentionings of the... creature, "The Call of Cthulhu" is the only story he ever wrote about the monstrous deity from the far reaches of space. I would say it's because of the 80s RPG except that that game only came about because "Cthulhu" was already a thing. Even TSR tried to use the character as a deity of some sort in one of their D&D publications.

In fact, I think all of the popular culture reference to Cthulhu have led to a misconception about who or what Cthulhu is or was. Not that I'm going to tell you, because you should read it. Just know that Cthulhu is not just some demon from Hell. It's more complicated than that. "In his house at R'lyeh, dead Cthulhu waits dreaming."

The story itself seems to be typical of Lovecraft's style, meaning the action happens to characters other than the protagonist, who is only researching events that have already happened. Sometimes, as in the case of "The Call of Cthulhu," this raises the tension and suspense. Why? Because, as we find out early in the story, our protagonist is expecting to be murdered, and his research into his uncle's supposed accidental death tells us why.

So here's the thing: I don't quite get why "The Call of Cthulhu" has taken on such a mythic quality. It was good, but I wouldn't say it's great. It's certainly apparent that there is a huge tapestry of mythos that this one story was pulled from and, evidently, Lovecraft had some of that worked out. Of course, I'm not very far into my reading of Lovecraft, yet (I've only read about half a dozen stories, so far), so, maybe, it's the other mentions in other stories that really build up the "legend" of Cthulhu and have made so many other people want to build on it. That said, even Lovecraft said this particular story was only "middling."

At any rate, it's certainly worth a read if, for nothing else, just to see where all the Cthulhu stuff came from. And, honestly, I think the whole cult of Cthulhu aspect is much more frightening than Cthulhu itself. Who, after all, is going to kill the protagonist? Assuming that happens, of course.
Posted by Andrew Leon at 12:00 AM