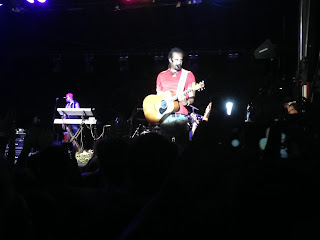 My wife and I went to see Michael Franti & Spearhead recently. He's kind of a big deal around here since he's local. Well, localish. From  the Bay area, at any rate. However, even being a big name around here doesn't translate into a huge concert like with some big, popular group or artist. The concert was smallish and cozy and tons of fun, but I am wondering how many of you have heard of him.

Or, maybe, this one:

Those are excellent songs, right? And you've probably heard of one of those, because they've been featured in all kinds of movies and TV shows. In fact, the first time I heard "The Sound of Sunshine" was in a movie. Or a TV show. I don't remember. I do remember needing to look it up, though, and finding out my wife was already familiar with Franti. Or something. It's been a while.

Let me make something clear: This is almost the only mainstream concert I've ever been to. I would actually say it's my first, but my wife insists that the Deana Carter concert we went to back in '97 counts as mainstream, so I guess this is my second. This is not to say that I haven't been to a lot of concerts, because I have; it's just that they've all been Christian concerts. It's a different experience for me to go to something like the Franti concert.

But, man, it was so much fun! Despite the woman who spilled her drink on my wife, and the old white asshole dude who was dancing all over people so that everyone had to move away from him and allow him, like, a 4' radius so that he wasn't stepping on people (I think he's the reason the woman spilled her drink on my wife), and the other old white asshole dude who kept backing into my wife despite the fact that we kept moving back to get away from him (by the end of the concert, he had almost 6' feet of space in front of him because he just kept backing into us (seriously, what the heck? How much space do you need?). Despite all of that, and the overwhelming smell of weed, it was an awesome concert and a great performance.

Franti is a musician I can really admire for more than just his skill at music. His belief in equality for people strongly parallels my own, and many, many of his songs have to do with that. As my wife says, he splits his music between love songs (like the two above) and political activism songs, and all of them are good to great. And most of his music is just fun. It's fun, and it says something, which is kind of rare.

So... I guess what I'm saying here is that, if you've never listened to Franti, you should give Franti a listen. He has some great music. If you ever get the chance to see him in concert, you should definitely do that! He was great. He brought kids up on stage to sing with him at multiple points during the concert, and that was really cool. He walked down among the crowd several times, which was COOL. He just put on a good show with great music. How can you say no to that?
Posted by Andrew Leon at 12:00 AM